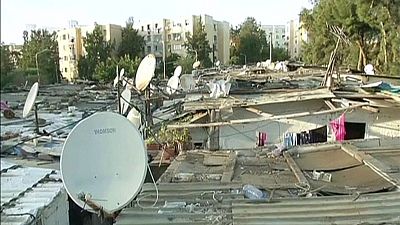 With a major relocation exercise underway, Algerian authorities are bent on sticking to an intended eradication of slums in some of the country’s shanty towns.

New homes, as part of a relocation roadmap, have been made available to affected families. Some have already taken possession of keys to the new facilities. It is a moment that some have been waiting for years.

92-year-old Khader Saadia is a beneficiary.

“I am in my 90 years. I do not feel Algerian, I will not feel independent until I’m in my apartment.”

The Algerian economy has been faltering since mid-2014 when global oil prices started tumbling.

Even so, the governor of Algiers said the scheme is designed to help the country’s poorest.

With a projected 9 percent cut in spending for 2015, 2016 looks more promising for the North African country.

The country posted a trade deficit of $10.33 billion in the first nine months this year, swinging from a $4.09 billion surplus a year earlier.

Algeria imports almost everything for its 40 million people, from food to medicine and industrial equipment because of weak domestic production that is partly due to lack of investment.

Interventions such as this only goes to strengthen a carefully thought out economic recovery plan.