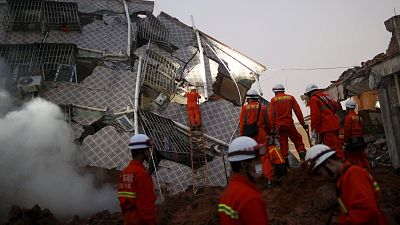 91 people are still missing in China’s Guangdong province, several hours after a landslide hit the area.
Search operations are continuing in the industrial zone of Shenzhen, where 33 buildings were buried, local authorities say.
The deputy mayor said that 7 people had been rescued but 59 men and 32 women, were still missing.
“Until 2am this morning, we found seven people who were trapped under rubbles and another 900 were relocated. At three o’clock, the authorities decided to strengthen the research operations of construction equipment and 78 excavators have been called upon to ensure that all affected sites are well covered.”
More than two thousand people, including firefighters and medical personnel department, were mobilized for the occasion.
The land slide has injured 14, with three seriously injured and the news is far from reassuring.
Experts say that possibilities of new landslides occuring cannot be ruled out.

Experts say that possibilities of new landslides occuring cannot be ruled out.