First goal in 2023 for Andre Ayew in Qatar. The captain of the Black Stars of Ghana was back to his club Al Sadd for the first time since the World Cup. He scored his third goal of the season, the first since last September.

Ghana captain Andre Ayew tapped the visitors into an early lead, and Akram Afif doubled the advantage six minutes into the second half - Baghdad Bounedjah with a hand in both goals.

The FrenSteven N'Zonzi got Al Rayyan back into the game moments after Afif's goal - the former Sevilla and Roma man with a fine near-post flick.

Despite a last chance from Ivorian striker Yohan Boli, Al Sadd won two goals to one and moved to within two points of leader Al Gharaffa with a game in hand. 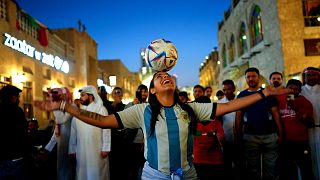 Last four teams in Qatar prepare for the final matches

Last four teams in Qatar prepare for the final matches