In eastern DRC, M23 rebels met soldiers from a regional military force on Friday to hand over a strategic frontline position near the major eastern city of Goma.

According to AFP, the hand over follows heavy international pressure on the M23 rebel movement to lay down arms.

"We hope that the government in Kinshasa will seize this opportunity with both hands and also work to bring peace to our country. (...) "The fact that we are in the process of withdrawing, that's what is being done today and at the moment. And the fact that we are fighting, that's you, and if we were attacked, if we continue to be attacked, do you think that we are going to cross our arms? No! The answer is no!", said M23 representative, John Nzenze, during the hand over ceremony.

The representative of the recently deployed East African Community military force said the hand over was a "positive indicator" for the region plagued by violence.

"The M23 withdrawal and subsequent takeover by East African Regional Force in areas under control is a positive indicator that the agreed upon strategy of restoring normalcy in the Eastern DRC remains on course", affirmed General Jeff Nyagah, EAC Regional Force Commander.

In late November Congolese and Rwandan representatives met in the Angolan capital, Luanda, to reach a truce agreement. 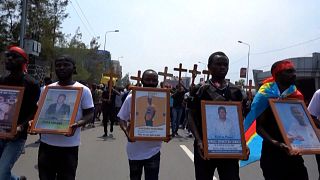