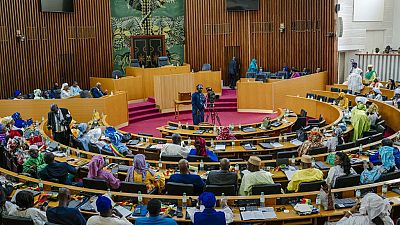 The two deputies of the Senegalese opposition who hit a colleague of the majority in the National Assembly were imprisoned Thursday in Dakar and will be tried Monday for "intentional blows and wounds", we learned from their defence.

Massata Samb and Mamadou Niang caused a national outburst on December 1 when the former slapped parliamentarian Amy Ndiaye, and the latter kicked her in the stomach, in full session and in public. They accused him of having made disrespectful remarks against the religious leader leading their party, the Unity and Rally Party (PUR).

The leader of the PUR, Serigne Moustapha Sy, is a religious leader who, without being a deputy, is very influential in Senegal.

Images of the altercation, during which Amy Ndiaye tried to throw a chair after being slapped, circulated repeatedly in the media and on social networks. This confrontation was perceived as symptomatic of the tensions between the opposition and the majority, of the violence exerted against women but also of the untouchable status of marabouts like Moustapha Sy.

The 14th assembly of #Senegal convened for the first time since the July election. Tension was high and #MPs were highly strung. Per the agenda, the 165 members of #parliament were to elect their #president. #Africanews https://t.co/a7UpUXFHmm

Amy Ndiaye, mayor of the town of Gniby (centre), was hospitalized. A medical certificate brandished by her camp says that she is pregnant and that there is a risk of loss of the baby.

The police were seized by the prosecution following a letter from the President of the National Assembly demanding prosecution, according to the lawyer of the deputy.

Massata Samb and Mamadou Niang disappeared for several days while the majority and the opposition argued verbally over responsibility for such excesses, the follow-up to be given and the need to lift their parliamentary immunity.

They appeared at the Assembly on Monday and were taken to the Criminal Investigations Division (judicial police) where they were taken into custody on Tuesday, local press reported. They were brought to the prosecutor's office in Dakar on Thursday, according to their defence.

"They asserted their immunity but the prosecutor felt it necessary to place them today under a warrant of committal. They will be tried on Monday in flagrante delicto," one of their lawyers, Abdy Nar Ndiaye, told AFP.

They still voted by proxy Thursday during the vote of the motion of censure tabled by the opposition against the government of Prime Minister Amadou Bâ , appointed in September by President Macky Sall. The motion was rejected by Parliament.