As the 2022 World Cup in Qatar comes to an end this weekend, it is already time to take stock. Morocco, the surprise team of the tournament, was able to place Africa on the world map of football.

Never a team of the continent had reached the semi-finals of a World Cup. A unique performance that was greeted Friday by the president of FIFA, the Italian Gianni Infantino

"I want to congratulate Morocco, hat. And also I want to congratulate the other African teams. Senegal made it through the group stage. they played against a very strong England. And also Cameroon, Ghana and Tunisia. Fighting until the last minute to qualify. This puts on display the level of African soccer. I am very happy. The moment of African soccer was always about to arrive. And it finally did.

Gianni Infantino also recalled that from the next edition, which will take place in the United States, Canada and Mexico, twice as many African teams will qualify. Indeed, the World Cup will be held in 2026 with 48 teams instead of 32 until now.

In total, 9 or 10 places will be allocated to African soccer. 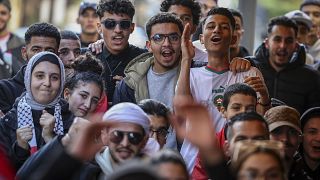