The first African president to visit Kiev since the start of the Russian invasion of Ukraine, president Sissoco Embalo of Guinea-Bissau,met Ukrainian President Volodymyr Zelensky, a day after a visit to Russia where he also met President Vladimir Putin.

Embalo emphasized that Guinea-Bissau remains an unwavering partner” for Russia and Ukraine.

Volodymyr Zelensky, President of Ukraine said that as of today, Russia is blocking 170 ships with grain for African and Asian countries.

"In November, we must do everything to prevent Russia from disrupting our food exports. Otherwise it will provoke a price explosion in the food market, a new worsening of living conditions for millions of people. As of today, 170 ships carrying grain for Africa and Asia are blocked by Russia."

At the press conference, Zelenskyy said a prerequisite for talks would be Russia´s recognition of Ukraine´s territory, borders and sovereignty.

The two sides have managed limited cooperation on certain issues, such as the exchange of prisoners of war and repatriation of remains.

Mr Embalo also assured that he would "ask" the Russian President "to release" the more than 165 ships blocked near the Bosphorus Strait, while Ukraine accuses Russia of deliberately delaying these ships intended for the transport of cereals by prolonging inspections carried out in accordance with an agreement reached on these deliveries which are crucial for many countries in Africa and Asia. 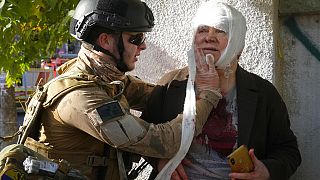