Stirring a renaissance in areas plagued by land mines from past conflicts, the NGO Mines Advisory Group, known as MAG, is an NGO committed to the removal of landmines in the Eastern Provinces of Angola. With the support of the Angolan government, this NGO has cleared more than 10 million square meters of minefields providing ideal conditions for communities to re-establish, re-develop and flourish. The extraordinary and essential work of this NGO, is paving the way for Angola’s continued economic and social development.

Civil war ended in Angola 20 years ago, but there was a haunting legacy: land mines shutting down farmers, builders, families, and kids. It was a huge and painstaking effort to track down all the mines and remove them, but it was essential work in order to give a normal life back to the Angolan population.

Among those who did get their lives back is Deolinda Raquel Chihinga, who does community outreach work MAG. Minga – as she’s nicknamed - remembers how it was before, having been a victim herself of a mine explosion herself when she was just six years of age,

"The mines destroy the lives of human beings and harm the community. They are placed under the trees or dug in a hole like in the grass."

Minga says women play an important role in the recovery of a region whose landscape is still marked by the vestiges of war. Where rusting and wrecked military hardware share the landscape with them.

There remain countless victims like Minga, coping with their injuries, trying to gradually rebuild their lives with the help of physiotherapists.

Landmines had put a halt to a lot of redevelopment in the area, as well as heavily impacting farming, but after many years of work, there is now light at the end of the tunnel, and a feeling of liberation from a terrible danger that once lurked beneath the surface of the land unseen. 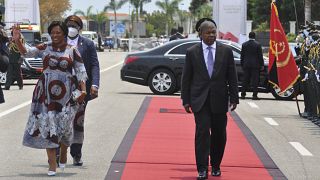