Three Nigerian teenagers have developed an app they hope will help to tackle climate change.

The team has created 'EarthExp' which combines information about environmental trends with social networking and games.

Users create a city but need to consider how the environment might affect it as it develops.

Fortune Somuadia is one of the developers and explained the thinking. behind the app.

"So it's basically to use a persuasive strategy to induce a behavioural change in our users and in return we get a positive feedback towards climate action."

"In the game we also have a feature where if you cut one tree you will have to plant three more trees," she says.

"So, in the game if you don't take care of your environment and all that other stuff, you notice that it affects the way you behave around your surroundings."

Africa needs around $3 trillion to fulfil its self-determined emissions targets, known as nationally determined contributions, that each country is required to submit as part of the 2015 Paris agreement on climate, according to U.N. and Africa Development Bank estimates.

Fortune explains that, although Africa is not the biggest producer of greenhouse gases, they are severely impacted.

"We are actually very sceptical about it because even for the fact that Africa as a whole doesn't emit as much greenhouse gases like the Americans and other countries, we are largely affected. So severe floods happen in Africa and heatwaves happens, we are most affected by it."

EarthExp was a regional winner in a 2022 global competition organised by Technovation; a US-based nonprofit company empowering women and girls to use technology for change.

It comes ahead of the 2022 United Nations Climate Change Conference, or COP27, scheduled for November in Sharm El Sheikh, Egypt.

The mobile application is in addition to their campaigns in schools and around their neighborhood, urging people to dispose of refuse properly and reduce the use of plastic. 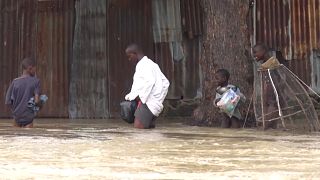