Madagascar's Defence Minister Richard Rakotonirina has paid a visit to the injured at a hospital after 19 people died and 21 were injured during clashes at a police station in the country's southeast.

Hundreds of protesters armed with blades and machetes attempted to force their way into the building in Ikongo south east of the country where four suspects were being held over the kidnapping of an albino child.

Richard Rakotonirina, who visited Ikongo on Tuesday, said the incident needed a more thorough investigation. "Was it a blunder? Was it misconduct? We need to see who was responsible for what. In any case, we will take the necessary sanctions," he told AFP by phone.

The police confirmed Tuesday that officers killed 19 people and injured 21 others after opening fire on what was described as a lynch mob angered over the kidnapping of an albino child.

"Nineteen people lost their lives and 21 are injured and are still being treated" at Ikongo hospital in the country's southeast, the national police said in a statement.

A previous report from police on Monday said 11 people had died. Around 500 protesters armed with blades and machetes attempted to force their way into a police station, a police officer involved in the shooting told AFP, speaking on condition of anonymity.

Police said calm returned to Ikongo, a town about 350 kilometres (220 miles) south of the capital Antananarivo, on Tuesday, with additional officers deployed "to keep the peace".

An investigation into the incident was ongoing, police said, offering condolences to the families of the dead.

The kidnapping took place last week, according to Jean-Brunelle Razafintsiandraofa, a member of parliament for Ikongo district.

No further details have been released about the child. Officials said the child's mother was killed by "bandits".

Four suspects were arrested and taken into custody, but some members of the community allegedly decided to take matters into their own hands.

National police chief Andry Rakotondrazaka defended officers at a press conference Monday, saying they had done everything they could to avoid confrontation and were left with no choice but to resort to self-defence.

He said police moved from firing tear gas to live rounds when the crowd breached a security perimeter.

A source at the defence ministry said some inmates at the nearby prison took advantage of the commotion to escape. Revenge attacks are common in Madagascar.

Ikongo saw 800 people barge into a prison in February 2017, in search of a murder suspect they intended to kill. They overpowered guards, allowing 120 prisoners to break out of jail.

In 2013, a Frenchman, a Franco-Italian and a local man accused of killing a child on the tourist island of Nosy Be were burnt alive by a crowd.

Some sub-Saharan African countries have suffered a wave of assaults against people with albinism, whose body parts are sought for witchcraft practices in the mistaken belief that they bring luck and wealth.

Albinism is caused by a lack of melanin, the pigment that colours skin, hair and eyes. The genetic condition affects hundreds of thousands of people across the globe, particularly in Africa.

Madagascar, a large Indian Ocean island country, is ranked among the poorest in the world. 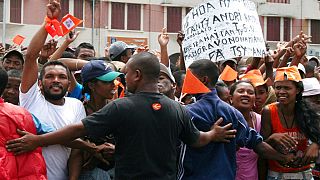