Libya's government replaced the head of the key National Oil Corporation on Thursday in a dramatic move that prompted the United States to warn against any "armed confrontation" over the sector.

The North African country's vast oil reserves have often been at the heart of political disputes, but the NOC had largely stayed neutral despite years of division since the 2011 toppling of dictator Moamer Kadhafi in a NATO-backed rebellion.

However, in a decree made public on Wednesday, the unity government of Abdulhamid Dbeibah appointed former central banker Farhat Bengdara to replace NOC head and veteran technocrat Mustafa Sanalla.

On Thursday morning, Bengdara took up office at NOC headquarters in Tripoli, where he gave a news conference.

"It's vitally important under the current conditions that Libya regains its oil and gas export capacity as quickly as possible," he told journalists.

"The oil sector has fallen prey to political struggles, but we will work to prevent political interference in the sector."

Dbeibah has refused to cede power before elections, and Bashagha has so far failed to take office in Tripoli, raising fears of renewed conflict just two years after a landmark truce ending a ruinous attempt by Haftar to seize the capital by force.

The US embassy said Thursday it was following developments "with deep concern" and stressed that the NOC was vital to Libya's "stability and prosperity".

As a result, Libya's crude and condensate exports have fallen from around one million barrels per day in March to just over 400,000 so far in July, according to data intelligence firm Kpler.

The blockade has also contributed to crippling power shortages that sparked angry protests earlier this month.

The blockade also comes amid a supply crunch on global oil markets, rattled by the war in Ukraine, in turn prompting consumer nations to pressure other producers to ramp up output.

US President Joe Biden is expected to press Saudi Arabia on the subject when he visits the kingdom this weekend.

US Ambassador Richard Norland, who has been working on a mechanism to manage the highly disputed revenues from Libya's crude sales, said Sanalla's replacement "may be contested in court but must not become the subject of armed confrontation".

However, the appointment of Bengdara, a Kadhafi-era central banker reportedly close to Haftar, has triggered speculation that Dbeibah made a deal with the military strongman to allow him to keep power in Tripoli.

Emadeddin Badi, a senior fellow at the Atlantic Council, said Bengdara's appointment was "the product of a momentary convergence between Dbeibah and Haftar, but it could be the basis for a broader deal".

"Dbeibah gets several things from it," Badi told AFP.

"He regains access to state funds, it stymies the US financial mechanism or the momentum to implement it, and Haftar will presumably lift the (oil) blockade and limit, if not completely halt, his support for Bashagha."

Aydin Calik, an energy analyst at the Middle East Economic Survey (MEES), said he expected the oil blockade would be lifted "very shortly".

But he warned that the new board was contested, including by Sanalla, who has long mediated disputes to keep Libya's crude flowing and positioned himself as an interlocutor with foreign powers and oil firms.

Calik told AFP that "uncertainty over who is in charge at NOC raises questions: Who can legitimately export oil? Will international oil companies recognise the new NOC board? What might this mean for their contracts?."

In a defiant video message on Wednesday evening, Sanalla told Dbeibah that "this institution belongs to the Libyan people, not to you or the Dbeibah family" adding that "the mandate of your government has expired".

Bengdara insisted Thursday that he had been picked for the job because he was "non-partisan" and "can travel anywhere in Libya". 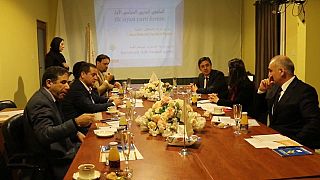