Rebecca Birungi had her breasts cut off in April… that mastectomy scared her more than the disease, thinking she would be an abnormal woman without a bust.

But thanks to cancer survivors who are making prosthetic breasts, she has gained the courage to walk with her head held high.

“You wouldn’t know I don’t have breasts yet both of them are removed” - She said while trying on prosthetics.

According to the World Health Organization, breast cancer deaths in Uganda reached 1,128 in 2020, which is 0.54% of total deaths. It is the second most common cancer in the country.

Rebecca is one of the many women benefitting from this project, which was started by Margaret Okello, who has been surviving cancer for the last 15 years with both breasts removed.

“So we embarked on working to get something which is acceptable to us. We started slowly, we went through it. It was trial and error until we got a shape which we thought is good for us. And then we also gave it out to others to try and give us feedback” declared Margaret Okello, breast cancer survivor and founder of cancer aid organization.

Imported prosthetic breasts are very expensive for most women but these made with locally available materials can easily be accessed. One goes at $10.

Entities procure them in bulk and donate them to the Uganda Cancer Institute where hundreds of survivors are desperate to feel whole again.

And that is what motives Anna Tumukunde, trained specially to tailor the prosthetics :“They get what to wear and they are comfortable and happy. It is better than wearing rags” she said.

For survivors, these prosthetic breasts go a long way in filling the gap in their chests.

But doctors are emphasizing screening, routine checkups, and consistent treatment to improve the outcome of survival. 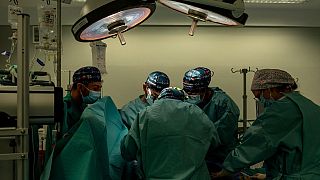