The conflict between the Democratic Republic of Congo and its neighbors Rwanda and Uganda is long-standing.

In the Great Lakes region discrimination and control over minerals have resulted in the creation of several militias.

The so-called March 23 Movement emerged in 2012 and occupied the main city of North Kivu province.

International pressure on Rwanda, which stopped funding the rebel group, and the military victory of the Congolese, backed by UN forces, led the M23 to sign a truce the following year.

"What the rebels say is that there has been no compliance on the part of the government with the agreement that was signed at the time with Joseph Kabila Son, and therefore at this time, in 2021, the movement has resurfaced and resurfaced very strongly. Meanwhile, international forces and the Congolese government itself say that the country of Uganda and also the Republic of Rwanda, through President Paul Kagame, are supporting this rebel movement with arms and ammunition for the instability in the East," said Albino Pakisi, a political analyst.

Angola chairs the Inter-National Conference of the Great Region and has in multiple occasions tried to build unity within the region.

After receiving urgently his counterpart from the Democratic Republic of Congo, President Félix Tshisikedi, at the beginning of June, President João Lourenço tried to help solve the issue between the two parties.

A task made difficult by the economic interests at stake.

"Congo right now has a lot of rebel groups that are always making war in our country, especially in the Eastern part of the country because that part has a lot of important minerals. But we don't know if foreign people want to have minerals from Congo why can't they make contracts with the government?" asked Jeremy Salvador Salabiaku, DRC businessman.

Technological changes have accelerated the demand for coltan, an ore essential for making smartphones and computers.

North Kivu, a Congolese region bordering Rwanda and Uganda, has more than 60 percent of the world's reserves. 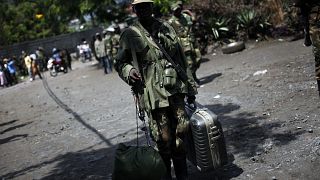