UN appeals for help to fight hunger in Somalia

It's a devastating outlook for millions of people affected by drought in Somalia was the warning left by the UN's Humanitarian Coordinator for Somalia.

The alert came on Tuesday as officials visited a camp for internally displaced people in the Baidoa district.

"The situation is extremely dire and grim: 7.1 million people are going to be affected by this drought situation before the end of this year. Unless we scale-up and step-up our response, unfortunately, many, many people – including at least, 370,000 children – will perish before the end of the month of June, which is next month. So, that tells you how dire the situation is", said Adam Abdelmoula, UN Humanitarian Coordinator for Somalia.

"I am here to mobilise, as much as possible, resources, and coordinate the effort of humanitarian assistance. Baidoa is where people who are most affected have arrived recently – close to half of them who are displaced from drought are here in Baidoa. We call on the international community to double their efforts and support Somali people in this difficult time", pleaded Abdirahman Abdishakur.

Somalia faces a growing crisis resulting from the combination of drought and the effects of the war in Ukraine.

Nearly all the wheat sold in Somalia comes from Ukraine and Russia, which have halted exports through the Black Sea since Moscow launched an offensive against its neighbour on Feb. 24. 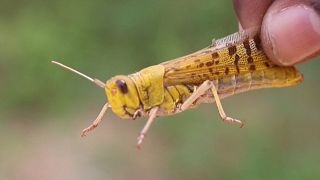