The 5th meeting of Ministers for Sea Affairs of the Community of Portuguese-Speaking countries (CPLP) took place on May 26, 2022, in Angola's capital. The officials met to reflect on the theme "Mobilizing Partnerships and Investments for the Sustainable Development of the CPLP Ocean. Challenges and Opportunities". In Luanda, fishermen are growing worried about Asian trawlers.

Fishermen in the Angolan capital are worried about the trawlers made by Chinese vessels in the seas of Luanda. André Hossi, who has been living off the sea for almost 20 years, told Euronews that the average production of a small boat is approximately 1,600 dollars or seven hundred 700 thousand KZ in the local currency. This value is divided by the owner of the boat to each sailor.

Hossi confessed that his biggest concern is the Asian competitors that have much more means: "They have their course, there in the 30 miles, that's where they trawl, 30 miles, 50 miles! You can't see it here. You want to see the reality then go look out to sea, in there, you'll see the reality."

Once the holds are emptied and the fish put on display on the quayside, it is time for sales. However, sellers have been complaining about high prices they pay to buy fish to resell due to the quantity.

Cristina André is one of them: "We came to buy this very expensive fish. There is no way, we have no [other] way, we don't have that money as for us to support our children."

The beginning of cacimbo, Angola's "winter", has brought good news to fishermen, mainly because of the amount of fish. There is better fish and in large quantities, the concern now is safety and hygiene.

Safety was precisely one of the subjects discussed at the 5th meeting of the Ministers of Sea Affairs of the CPLP. The officials met on Thursday, May 26, to reflect on the theme "Mobilizing Partnerships and Investments for the Sustainable Development of the CPLP Ocean.Challenges and Opportunities"

According to the organization's cooperation director, promoting partnerships for multiple benefits for the CPLP and individual countries was one of the goals. 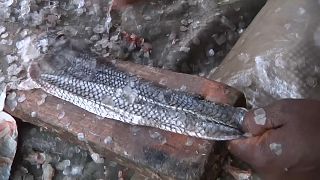