It was a double victory for Kenya at the Boston Marathon on Monday as Evans Chebet dominated a stellar field to claim the men's title and reigning Olympic champion Peres Jepchirchir bagged the women's title.

The last time Kenya took the top three spots on the podium was in 2012.

Congratulations also to Peres Jepchirchir and Mary Ngugi who won 1st and 3rd place in the women's race.

A proud nation applauds you for flying our flag high! pic.twitter.com/TCDRf9PGGA

28-year-old Jepchirchir won a see-saw sprint down the stretch, as the world's oldest and most prestigious annual marathon returned to its normal spring slot on Patriots' Day.

Jepchirchir, last year's New York Marathon champion, won her Boston debut by taking her fifth victory in a row since 2019 in 2:21: and 01.

"My target I was … want to run a streak or run course record, but due to the circumstances I could not make it, but I'm grateful that I won." The excited Peres Jepchirchir said

Jepchirchir and Ethiopia's Ababel Yeshaneh Yeshaneh, who was third in New York last fall, spent most of the morning running shoulder to shoulder

The 126th #BostonMarathon Women's Champion is @PeresJepchirch3 in 2:21:01. Peres is the 5th Olympic Gold Medalist to win Boston.#Boston126 pic.twitter.com/q5IxrMoDuU

Just after the 25-kilometre marker, the Ethiopian's eyes wandered from the course and she drifted into Jepchirchir. 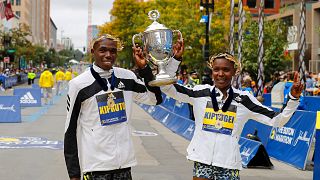