The Migration Museum in London is opening an exhibition dedicated to migrant entrepreneurs in the UK, spanning from brands like Deliveroo to local business owners.

Through various listening booths, videos, and displays, visitors get to understand the companies' overseas origins.

Sitting on the barbershop armchair, the mirror turns into a screen playing videos of conversations between barbers and their customers, mostly migrants.

This is part of a museum, and an exhibition dedicated to migrant entrepreneurs in the UK.

"While this started off as an exhibition looking at business, I think what we realised very quickly is that it's really a story about people. It's about the struggle to set up something and people facing quite a lot of barriers to get to somewhere and for some businesses they had this huge upward trajectory," says Aditi Anand, a curator.

The Museum tells stories like that of Dyke and Dryden, the first multi-million-pound Black-owned business in the UK.

Founded by Jamaican men, the company faced racism from banks that considered them as "high-risk" in spite of their high turnover.

The exhibition includes famous brand names like Deliveroo founded by a Tawainese-American man working in the City who was frustrated with the lack of options for dinner when he was working late.

The Museum is designed to look familiar and approachable — a key criterion for the curator, since the museum itself is located within a shopping centre.

"I love being in a shopping centre, to be honest, because I think it makes arts and culture very accessible, very democratic. We get a lot of visitors who are just passing by on their way to do their weekly shop at Sainsbury and it sort of means that we get people who might not necessarily come to the museum and might not necessarily think that museums are for them coming in," says Anand.

The exhibition is meant to be as interactive as possible, with many opportunities to listen to migrants' stories.

Karen Arthur, a London based entrepreneur who works as a fashion designer for her own brand, created a dress for the exhibition that elegantly blends a classic shirt to represent the UK, and hessian, madras and Ankara fabrics relating to her mother's home country, Barbados.

"It was fabric that was developed in India in the 17th and 18th century, when slave owners wanted fabric that was light and went well with the climate, but also reminded them of their own heritage. So it's been co-opted by us and made our own. The African print fabric, the Ankara fabric, is a nod to our heritage, and I love bright colours, so I was always going to work with colour. It was never going to be black and white," says Arthur.

Arthur does not just display her work but uses fashion as a message — one of feminism, anti-racism and anti-ageism.

"It's important to me as a black woman and as an older black woman it is important letting people know that I'm not invisible, I'm not about to disappear. And it's important to acknowledge the contribution of people like my parents and lots of parents of migrants who contributed to this country," says Arthur.

Through the door at the back, a long corridor gives access to seven booths, where seven migrants tell their personal stories and visitors can take a seat in front of a portrait of the person speaking to them through the headphones. One such person is Antonio Nigro, the owner of an Italian deli. He's now a pillar of the community, and nearly all customers walking in know him by name. He's now culturally both Italian and British — a time-consuming task, since he has to watch the news from Italy and the UK, he complains half-jokingly but affirms he's honoured to be part of the exhibition. 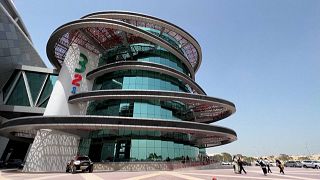