Supporters and members of a committee that honours the memory of Thomas Sankara, Burkina Faso's revolutionary leader, gathered at the monument built at the place of his 1987 assassination following a military trial that convicted several accused, including ex-president Blaise Compaoré, to life in prison.

"It restores something at a global level and I think that all the people of Burkina Faso should be proud. Proud because we have a competent justice system that is capable 35 years later, with 20,000 pages, of speaking justice, of speaking the law" said Pierre Ouedraogo, President of the Thomas Sankara International Memorial Committee.

The former president was tried in absentia.

Blaise Compaoré lives in exile in Ivory Coast after being toppled by public protests in 2014.

The officer accused of leading the hit squad, Hyacinthe Kafando, has been on the run since 2016, and was also tried in absentia.

"Thanks to the insurrection, this trial was able to take place. Every cloud has a silver lining. Because if this trial was held under Blaise's (Compaoré's) regime, where everything was in his favour, where everything was under control, perhaps we would have had a manipulated trial and we the victims would perhaps have been humiliated" added Germaine Pitroipa, a relative of one of the victims.

Former trade minister Harouna Kabore is satisfied with the outcome.

"In the case of Thomas Sankara and his companions, justice will allow us to take a step forward in the knowledge of the truth and justice", he said.

The six-month trial was avidly followed by many in the nation, for whom Sankara's bloody death remains a dark blot on the country's history. 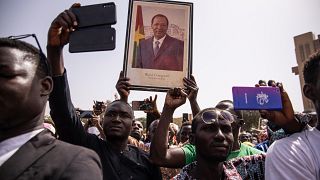