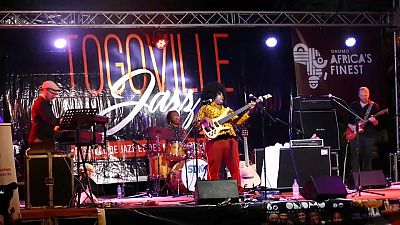 The 8th edition of the Togoville jazz festival has ended after hosting more than 30 concerts over two weeks, featuring artists from Lomé to Agbodrafo and of course Togoville.

The forum has become essential for musicians and groups from all over Togo but also from Africa and even Europe.

This year the organisers paid tribute to women in Jazz such as the Beninese star Angelique Kidjo.

On stage, the Togolese singer Sabine Kouli chose to be accompanied by a new generation of musicians.

"It something very strong because there is this mixture between their attraction for jazz music and also for African music," saidKouli.

"So there is a kind of synergy between these two musical styles which enrich and really bring something new. I think that these Togolese youth who are growing up in the footsteps of great jazz artists will be able to offer the world something quite unique."

Drummer, percussionist and composer, Kossi Mawun is considered one of the most promising of this new generation of Togolese jazzmen.

He explains: "I mixed the rhythms of Togo with harmonies to give another colour of jazz. The melodies come into my head while walking in the street, I take my cell phone and I record the melody."

The highlight of the festival was the performance of Manou Gallo, an Ivorian bassist and vocalist, who has long been fighting to be accepted on the continental scene as well as campaigning for equal opportunities for women in West African music.

"Instruments since the dawn of time have been reserved for men. We tend to say that the African woman is only good for making children and staying at home. So yes, I want to show another image of this African woman who remains a strong and free woman," said Gallo.

Togoville Jazz is now preparing for its next edition in March 2023.