Hurricane Gombe has hit northern Mozambique with torrential winds and rain, causing extensive damage to homes and infrastructure and leaving at least one person dead.

A resident of the city of Nampula was electrocuted by a fallen cable while trying to secure his roof, according to a report by Mozambican television station Miramar. Electricity, water and mobile phone services were cut off, making communication difficult.

Amade Abubacar, a journalist living in Nampula, said he has been without electricity and water since this morning and that the telephone network is fluctuating. The city is paralysed, and commercial establishments and public institutions are closed, he said.

Mobile phone operator Vodacom issued a statement saying it was working to restore its services in the affected areas, while Mozambique's national airline, LAM, cancelled flights to and from the cities of Nampula, Nacala, Quelimane and Pemba.

According to the National Institute for Disaster Management, food aid destined for distribution in the affected districts was damaged by the rain, with the roofs of warehouses being ripped off.

After hitting the mainland, the cyclone weakened slightly, according to Mozambique's meteorological institute, which said the cyclone's winds were blowing at 130km/h with gusts up to 165km/h.

Heavy rains, very strong winds and thunderstorms are expected in the central and northern provinces of Mozambique, the meteorological institute said. 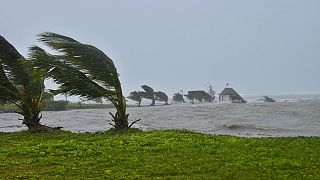