Cyclone Batsirai is blamed for the deaths of 20 people in Madagascar and for making more than 55,000 people homeless victims after slamming into the island's eastern coast, officials said Monday.

The tropical storm weakened quickly as it moved southwest across the island, missing the capital Antananarivo and posing little risk to other areas except for heavy rainfall, the national meteorological department said Monday.

Batsirai, southern Africa's second big cyclone this year, is forecast to dissipate further as it exits Madagascar and should not pose a serious risk to Mozambique, said the weather department.

Officials in Madagascar are working to attend to the damage caused by Batsirai.

President Andry Rajoelina went to the town of Mananjary Monday to see the storm's destruction and the relief efforts.

Batsirai destroyed about 3,000 dwellings and government buildings and flooded 5,700 others in Mananjary and nearby towns, officials said.

The World Food Program Director in Madagascar Pasqualina DiSirio warned that rise crops had been damaged by the cyclone, threatening the country's food supply for months to come.

"This (rice) is the main crop for the Malagasy people and they will be seriously affected in food security in the next 3-6 months if we don't do something immediately and we don't help them recover," he said. 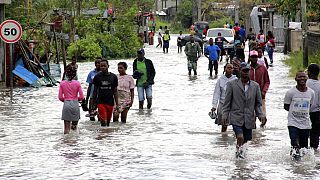