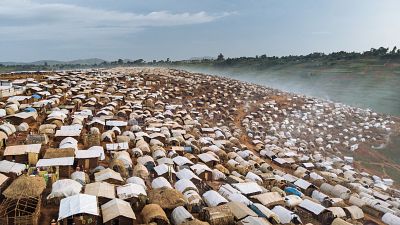 During a visit to the Democratic Republic of the Congo (DRC), UN peacekeeping chief Jean-Pierre Lacroix stressed that attacks against the displaced persons are unacceptable and called on the authorities to thoroughly investigate these grave incidents.

Lacroix is currently on a mission to the DRC, representing Secretary-General Antonio Guterres who had to rush back to New York as the Ukrainian crisis heated up.

The Under-Secretary-General visit Bunia on Tuesday (22 Feb) when he met with the Congolese Minister of Defense, Gilbert Kabanda, and the provincial authorities of Ituri province, before visiting Roe, a site where more than 60,000 displaced people live under the protection of peacekeepers.

During his visit to the internally displaced persons (IDP) camp, the UN official said there were “a lot more IDPs than it had over the last few years.”

He stressed the need “for support, for assistance, for security, and for the crimes committed against the population to not go unpunished.”

Lacroix also stressed the need to provide security for the displaced, following attacks in the region by the CODECO militia, while also ensuring humanitarian access and working on community reconciliation.

The UN peacekeeping chief is expected to visit Goma to meet with the military governor of the North Kivu province, before heading to Kinshasa to participate on Thursday in the Summit of the Regional Oversight Mechanism of the Addis Abeba Peace, Security and Cooperation Framework for the DRC and the region.