Liberian President George Weah visited survivors of a deadly stampede. On Thursday, he was at the bedside of some of the fifteen survivors admitted to hospital.

Liberian President George Weah visits victims in hospital after a stampede at an open air prayer meeting in the capital Monrovia killed 29 people, including 11 children and a pregnant woman. On Thursday, the death toll of the religious gathering that took place overnight between Wednesday and Thursday, was provisional. In fact, a number of people were still in critical condition.

"A very sad day in our country and a tragedy, George Weah commented**. I want to express our sympathy of all the families that lost their loved ones [...] going forward, we will make amends to make sure that those that are having crusade will make sure that if the space is there for 10 people, it should be 10 people.**"

Details about the incident remain sketchy but according to local media, the prayer gathering, locally known as crusade, was held on a football pitch in New Kru Town. Such gatherings typically gather thousands of people in Liberia, a highly religious country where a majority of the population of five million are Christians.

Local media reported that robbers wielding knives and machetes attacked the worshippers and this may have triggered the stampede.

Gathering attendee Elisabeth Wesseh told AFP that "zogo boys" -- a local term for young criminals -- had threatened worshippers with knives at the entrance, demanding money and telephones. "We got afraid and started rushing to the door," the 34-year-old said, adding that the doorway was too small for everyone to get through.

A stampede at a similar prayer event in the centre of Liberia in November 2021 killed two infants, and hospitalised several others, according to local media.

President George Weah declared a three-day period of mourning and ordered an investigation, his office stated. 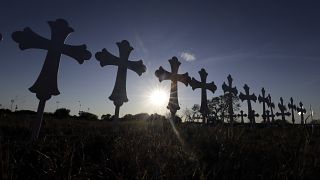