Libya is likely to conduct its general elections in June after missing the December deadline to elect its first president since the 2011 ouster and killing of longtime dictator Moammar Gadhafi.

U.N.'s special adviser on Libya, Stephanie Williams who has been pursuing this agenda told the Associated Press late Sunday that it is still "very reasonable and possible" for the country's 2.8 million voters to cast their ballots by June in line with the U.N.-brokered 2020 roadmap.

The country’s inability to hold its first-ever presidential election came as a surprise to many, especial international bodies that had put in measures to ensure the elections could be executed in December. Williams, who led U.N. efforts to end the latest session of violence in Libya in 2020, said elections are needed in the country to give credibility to the country's institutions. "All the institutions are suffering a crisis of legitimacy," she said. "I don't see any other exit for Libya other than a peaceful political process."

After missing the initial date, Libya's election board proposed that presidential polls should take place on January 24, but that could not be considered.

The country jumped into chaos after the NATO-backed 2011 rebellion and split into rival governments, one in the east, backed by military commander Khalifa Hifter, and another U.N.-supported administration in the capital of Tripoli, in the west.

In April 2019, Hifter and his forces, backed by Egypt and the United Arab Emirates, launched an offensive to try and capture Tripoli. His campaign collapsed after Turkey and Qatar stepped up their military support of the Tripoli government with hundreds of Turkish troops and thousands of Syrian mercenaries.

In October 2020, the UN-led to the formation of a transitional government and scheduled elections for Dec. 24. But the vote faced sudden challenges that eventually forced its postponement.

Libyan lawmakers who met in late December last year to examine the issues that forced a postponement of the presidential elections recommended laying out "an applicable roadmap".

Williams pleaded with lawmakers, who are convening again on Monday in the eastern city of Tobruk, to agree on a "clear, time-bound process with a clear horizon and to not create an open-ended process."

"They have to shoulder a great responsibility right now to respect the will of the Libyans who registered to vote," she said. "Libyans want an end to this long period of transition that the country has experienced since the events of 2011."

The challenges facing the elections include bitter disputes over the laws governing the electoral process and occasional infighting among armed groups.

Williams, however, did not see the departure of foreign mercenaries as a "prerequisite for the elections," saying that holding the cease-fire is the priority.

The vote's delay also threatens to open a power vacuum. Lawmakers have argued that the mandate of Dbeibah's government ended on Dec. 24. A legislative committee for the election suggested last month restructuring the interim government to "achieve stability."

The U.N. adviser called on the parliament to focus on delivering the vote rather than appointing a new transitional administration. 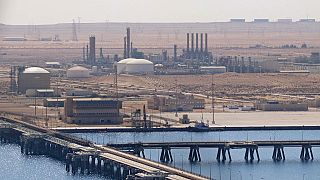