In Kenya, locals have expressed sadness at the death of Archbishop Desmond Tutu who passed away on Sunday.

Many residents in Nairobi praised the Nobel prize winner's work describing him as an African icon.

"Archbishop Desmond Tutu was an icon, he was a legend, he was an African leader, he was a Nobel Peace Prize winner and us as Africans we are really saddened by his death. He was at the frontline as he was fighting against apartheid. And I remember also in 2007 when we had the post-election violence, he was the first one to come and try to help us as Kenyans. And we really remember that" said Nairobi resident, Beth Musyimi.

Tutu played a mediating role in Kenya's crisis that followed the 2007 elections.

Many remember his influence and dedication.

Another Nairobi resident, Simon Ndung'u, added "we are very sad to lose one of our African icons; Desmond Tutu he was here in 2007 during our post-election violence. He did, he played a very big role and we appreciate what he did for the African people and also for the Kenyan people. Now we send our much heartfelt condolences to South Africans for losing our great father".

Desmond Tutu's legacy will forever be associated with the fight against apartheid, South Africa's brutal and oppressive regime against the black majority that lasted until 1994. 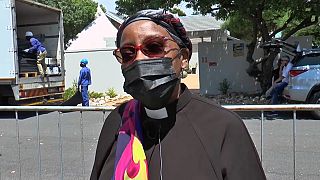