Egyptian authorities unveiled the renovated ancient promenade in the city of Luxor dating back 3,000 years. This is the latest government project to highlight the country's archaeological treasures.

"The 'Rams Road' was totally buried under dust, it connects Karnak and Luxor Temples, all of its statues were buried. It was discovered in 1949 but between 2005 and 2011, we did the most important restoration project which continued under the current Minister of Antiquities Khaled Anany and Mostafa Waziri, secretary-general of the Supreme Council of Antiquities. Now we have more than 1,000 statues some of them are headless."Egyptian egyptologist, Zahi Hawas stated

The ancient walkway - known as the Avenue of the Sphinxes, but also dubbed the Way of the Rams and the Path of the Gods - connects the famous Karnak and Luxor temples in what was the city of Thebes, which used to be Egypt's capital of antigues.

Mustafa Waziri, secretary-general of the Egyptian Supreme Council of Antiquities added "We still continue excavations works everyday and we conduct restoration works with all the heads of Sphinxes which were found, so they can be returned back to their original bodies."

the ancient road in Luxor, which sits on the banks of the Nile River stretches for several miles and had been under excavation for more than 50 years.

Thursday's event is the second flashy ceremony this year to honor Egypt's heritage. 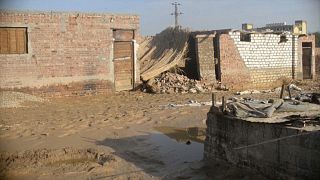