36 out of the 53 gendarmes killed in Inata in the Soum province in Burkina Faso on November 14 were buried on Tuesday, November 23. Whiles the atmosphere was filled with sorrow some relatives of the victims were unsatisfied about the quality of graves.

Okiri Mien is a relative to one of the victims who could not hide his disappointment and anger. He is of the opinion that the entire funeral organization could have been better.

"Today, everyone has a heart, has sleeping eyes, a conscience that makes you cry. Look at the widow who comes to bury her only child and since 2pm the child is in the grave. There is no organised follow-up by the army. Too many uniformed bodies, they should have gotten rid of those uniforms today, put on civilian clothes, peeling hands like soldiers hired to carry on to the end to provide dignified burials. Today it is us, tomorrow it is you."

After about three hours of delay on the part of the army, the 36 coffins arrived at the municipal cemetery of Gounghin in Ouagadougou covered with the national flag.

For others, It appeared the quality of the burials was not the only issue of concern as the questioned the hierarchy of the army.

"You get the impression that there is inertia in the military hierarchy. Nowhere in the world do you see kids at the front without a hierarchy trying to coordinate things. We have never heard of a single Burkinabè officer falling at the front. How can we explain that?" parent of victim, Adama Diaboug said.

Friend of victim Cheick Adama Tiendrebeogo blamed the whole situation on failed governance. "In a country, when you get to this level, it means that governance has failed. When in a country, we come to believe in people who give warnings on social networks, when we come to believe in activists on social networks, and when the word of a government is questioned, it means that this country is falling into the abyss. And today we have a duty to save that country."

Gunmen travelling on pick-up trucks and motorcycles attacked the Inata gendarmerie near the Malian border before dawn on Sunday, leading to drawn-out clashes.

The attack was one of the deadliest to hit the West African country's defence and security forces since jihadist violence erupted six years ago.

On Monday the death toll was reported as 32. However,government spokesperson Ousseni Tamboura said Wednesday that a total of 53 people were killed, 49 gendarmes and four civilians.

Hundreds of people protested in several cities across the country on Tuesday to demand resignations over the "inability to stop the terrorist attacks".

Burkina Faso has been hit by jihadist attacks since 2015, mostly in the northern and eastern regions close to Mali and Niger -- countries facing their own struggles against jihadists.

Jihadist attacks in Burkina Faso, attributed to movements affiliated to the Islamic State group and Al-Qaeda, have killed more than 2,000 people and forced more than 1.4 million to flee their homes 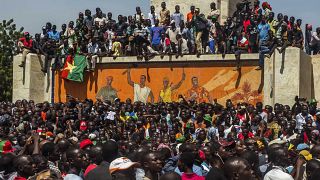 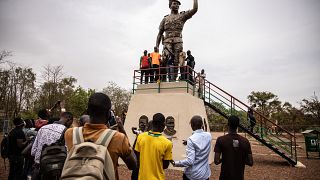 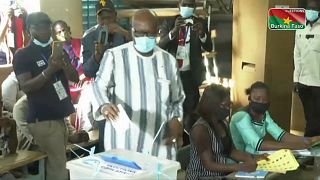