Seven million doses of the Covid-19 vaccines have been administrated among Nigeria's of 206 million poupulation.

Alhaji Lubisalah, a religious leader welcomed the efforts made by the government to combat the virus but said the authorities should pay more attention to the continent's battle against malaria, which he said was killing more people than COVID-19.

At Kuje Mosque in Abuja, the deputy Imam received a Moderna vaccine after Friday prayers in an effort to promote getting the jab.

"Yes, in this aspect (vaccinating people against COVID-19) they (the government) are doing good but, we have more important sickness, more than this, I don't know why the government are emphasizing on this. Like malaria now is killing many people in this country but government says nothing."

**_"If they (people that have doubts about the vaccine) are saying something different (other than that the vaccine is good) it means they don't know the impact of this. They don't have the knowledge of what it means to be vaccinated." said _**Usheni Bako Zakaria, trader and Muslim worshipper.

The WHO endorsed the world's first malaria vaccine on Wednesday after clinical trials carried out in three African countries - Ghana, Kenya and Malawi - where more than 800,000 children have received the vaccine since 2019.

The news has been received with excitement in Africa which accounted for 94% of the world's malaria cases in 2019 with an estimated 215 million cases, according to the WHO World Malaria Report 2020. 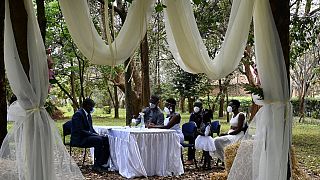