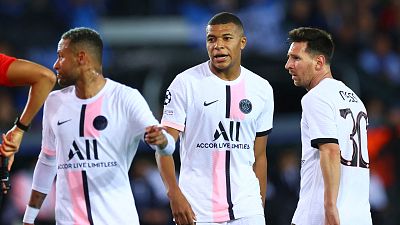 Argentine star Messi lined up with both Neymar and Kylian Mbappe for the first time, after being limited to just 24 minutes in a PSG shirt since his shock exit from Barcelona.

Ander Herrera, who scored twice in the weekend win over Clermont, gave PSG the lead by steering in Mbappe's cross on 15 minutes, but Brugge soon levelled through Hans Vanaken.

Messi curled against the bar from the corner of the area but PSG then lost Mbappe to injury and had to settle for a point against a team viewed as makeweights in a demanding Group A.

Pep Guardiola's City, beaten 1-0 by Chelsea in May's final in Porto, overcame a hat-trick from Christopher Nkunku to beat RB Leipzig 6-3 at the Etihad Stadium.

Nathan Ake headed City ahead from a corner and Nordi Mukiele's own goal doubled their advantage, but Nkunku nodded in to get Leipzig back in the game.

Riyad Mahrez added a third with a penalty before half-time only for Nkunku to head in again early in the second period.

Leipzig finished with 10 men after former City player Angelino was sent off for a second booking.

Liverpool captain Jordan Henderson hit the winner for Jurgen Klopp's side as they came from behind to defeat Milan 3-2 at Anfield in a meeting of two clubs who have combined for 13 European Cups.

And Moldovan club Sheriff beat Shaktar 2-0, thanks to goals from Mali international Adama Traore and Guinean forward Momo Yansane. Sheriff are the first club from Moldova to reach the group stage of the Champions League. 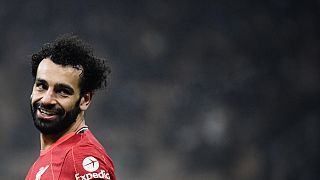