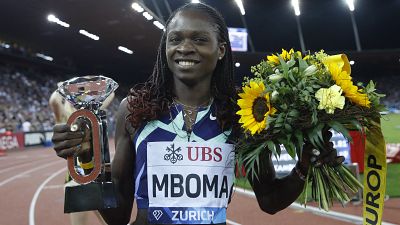 Namibian teenager Christine Mboma, who is unable to compete at certain events due to controversial rules over testosterone levels, continued her sparkling season with victory in the 200m on her Diamond League debut in Brussels on Friday.

Mboma's win in 21.84sec was the stand-out in a high-quality night of track and field in warm, still conditions at the King Baudouin Stadium in front of 28,000 raucous, unmasked, Covid-free spectators.

Dutch distance queen Sifan Hassan fell short in her bid to better her own world record in the mile, while Sweden's Armand Duplantis nailed a meet record of 6.05 metres in the pole vault, but failed in his own bid to go one better than his 6.18m world record -- an effort not helped by a long technical delay in raising the bar.

That left the floor to Mboma, who is classified as having differences in sexual development (DSD) -- or being an "intersex" athlete -- with naturally high testosterone levels and is thus barred from her chosen event, the 400m.

The 18-year-old only competed in her first race outside of Africa with an event in the Czech Republic in June. Since that she made her debut at a major international competition in Tokyo, winning a surprise Olympic silver in the 200m before going on to bag the world under-20 title in Nairobi.

"I'm really happy with this win because it's my first Diamond League race," said Mboma. "To be able to win in such a strong field is great.

"It has been a very tough and busy season with the Olympics and the world junior championships, but I'm still in good shape."

Mboma avoided comment on World Athletics regulations by saying that after having stepped down from her favoured 400m in Tokyo, the 200m was now her favourite event.

"I'm just doing my best, just see what I can do," the Namibian added.

"In the future I think I can race faster than that. In the next one or two years, I’ll try the 100m, just to see."

Burundi's Francine Niyonsaba, a former Olympic 800m silver medallist who shares Mboma's rare physiology deemed to give her an unfair competitive advantage in track events ranging between 400m and one mile, produced a last-gasp sprint to win the women's 5000m in 14:25.34.

"I still do not know if I like the long distance more than the 800m, but I love challenges," said Niyonsaba.

"I won't think too much about it because it is what it is. A good thing about it is that I have a lot to improve - I'm still learning and am sure that I can go a lot faster in the future."

Hassan, who won two golds and a bronze in an unprecedented effort at a distance treble in Tokyo, stormed to victory in the mile.

The 28-year-old made the most of two pacemakers and trackside lighting to clock a meet record of 4:14.74 in the non-Olympic discipline, albeit more than 2sec off her own world record set in 2019.

"Since Covid we never had so big a crowd, it was great!" said the Ethiopian-born Hassan, who will compete in the 1,500m at the season-ending Zurich finals next week.

"I wasn't thinking about the world record, although I knew I was on world record pace in the beginning. But in the middle, it slowed down a bit -- it doesn't matter."

Tokyo silver medallist Fred Kerley claimed victory in the men's 100m in 9.94sec ahead of US compatriots Trayvon Bromell, in 9.97, and Michael Norman (9.98).

Kerley, fresh from a personal best of 19.79sec in the 200m in Paris last week, said: "I'm happy with the win, but I'm not satisfied with my race because I didn't execute the race how I wanted... but 9.94 is a nice way to finish the season!"