The African Union observers in Zambia’s election signaled high tensions in the country following the Thursday vote to decide on the next leader.

The mission further confirmed that there has been heightened friction between the incumbent ruling Patriotic Front (PF) party and the opposition United Party for National Development (UPND).

"The mission notes that the 2021 general election took place against a backdrop of heightened political tensions in the country especially between the two major political parties," Ernest Bai Koroma. former president of Sierra Leonne and leader of the AU mission in Zambia stated.

Violence occurred in North-Western province, a Hichilema stronghold, where two people including a chairman of the ruling Patriotic Front (PF) party were killed, according to the incumbent leader.

The AU mission attributed this to tensed politics fueled by misinformation from the media.

"Despite its diversity, the media landscape remains polarized along with the political party. The campaign period witnessed a noticeable increase of hate speech and misinformation," AU observers mission further revealed.

Final consolidated results are expected to be declared by end of the day on Sunday.

The ballot is expected to be the tightest yet in the third successive standoff between President Edgar Lungu, 64, and veteran opposition candidate Hakainde Hichilema. 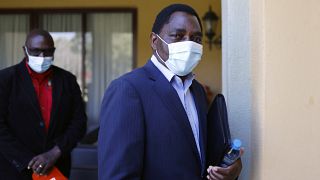