Meet California's unlikely allies in the fight against wildfires 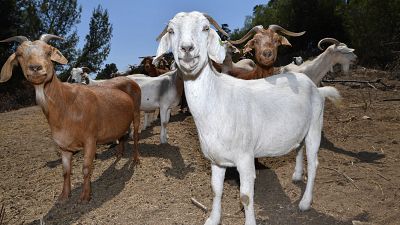 Their mission, should they choose to accept it, is simple: graze.

Goats are an unlikely but increasingly popular weapon in California's fight against the wildfires that rage through the western US state every year.

On a recent hot July morning, a herd of 80 ungulates were deployed to a hilly patch of land in Glendale, just outside Los Angeles.

They had been chomping away for the past 10 days or so, helping to clear away bone-dry vegetation that could go up in flames and threaten the surrounding homes.

Their work comes up a vital time. Last year was the worst in California's modern history for wildfires, with more than four million acres (1.6 million hectares) scorched.

Due to climate change and a brutal drought, officials fear that months of massive infernos are now the norm.

So any help is welcome.

"We started hearing a lot about goats, both from community members, other fire departments, other cities," said Glendale fire marshal Jeffrey Ragusa.

Eating easily flammable vegetation helps to restrict the spread of fire, and also creates a convenient corridor in which firefighters can operate to "protect the homes in a safer environment" should the need arise, said Ragusa.

Of course, the animals are just one small part of the strategy for coping with the threat of fires.

But their help can be valuable, lightening the workload for overstretched human contractors who create buffer zones by removing vegetation - often manually, in sweltering heat and difficult terrain - before and during ever-longer fire seasons.

"There's always a threat of injury to personnel," said Ragusa.

"I haven't seen a goat trip yet," he added with a smile.

The goats grazing in Glendale are brought in by Sage Environmental Group, a company that carries out habitat restoration and environmental planning.

Its founder, Alissa Cope, began incorporating goats into her work five years ago, and now owns around 400 of the animals.

The strategy carries an inherent risk - goats, if left to their own devices, will munch anything in their path.

"We watch them closely," she said. "If there's an area that we feel that they're overgrazing - which is essentially the downside of using goats - we will deliberately move them," using electric fences or luring them with hay.

Without revealing how much the goats earn for their labour, Cope says the cost of employing the animals is comparable to what authorities would pay for human workers - at a lower environmental toll.

The company runs similar projects elsewhere in California, including nearby Anaheim and South Pasadena.

The idea to bring in goats to Glendale originated with Rick Stern, a member of the neighbourhood homeowners association.

Stern heard of the strategy when his wife found out goats had helped keep the Ronald Reagan Presidential Library - also in southern California - safe from fire in 2019.

Months before the devastating blaze, a trip of goats had been dispatched to create a fire break around the famous complex.

While the goats' presence in Glendale is just a pilot program for now, it will be evaluated with a view to broader use.

"So far, it's been a really good program," said Ragusa. "We've been really happy with the results."