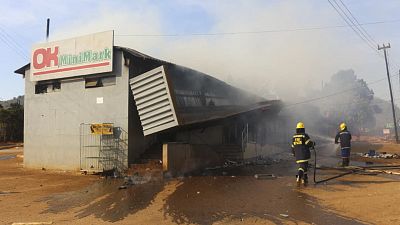 Since May, protests have rocked the small landlocked southern Africa kingdom of eSwatini.

Demonstrators are demanding democratic reforms and accuse King Mswati III, who has ruled the tiny mountain kingdom for more than 30 years as an absolute monarch, of repression.

Rights groups accuse the royal family, including the king's 15 wives, of enjoying a lavish lifestyle while many of the country's 1.1 million people live in poverty.

According to data compiled by Amnesty International, at least 20 people were killed by security forces and 150 hospitalized with gunshot wounds during the intense pro-democracy protests.

The government had so far said it had not received any official report of deaths, but confirmed on Wednesday July 7th through Commerce Minister Manqoba Khumalo twenty-seven people had died last week during the pro-democracy #eSwatiniProtests.

The Eswatini government denied claims that King Mswati III had fled the country as violence escalated.

Internet service providers said they had been ordered to cut access to social media and online platforms until further notice.

Here's a recap of what happened in the past few days.

The UN voiced alarm Tuesday at the eruption of deadly violence during protests in Eswatini, calling for an independent investigation into all alleged rights abuses, including by law enforcement.

The United Nations human rights office pointed to allegations of "disproportionate and unnecessary use of force, harassment and intimidation" by security forces sent in to quell the protests that escalated last week.

The allegations include "the use of live ammunition by police", spokeswoman Liz Throssell told reporters in Geneva.

She also pointed to reports that some protesters had looted premises, set buildings and vehicles on fire, and had barricaded roads in some areas.

"Although the situation is now reported to be calmer, we remain concerned at the potential for further unrest," Throssell said.

"We urge the authorities to fully adhere to human rights principles in restoring calm and the rule of law," she added, emphasizing that peaceful protests are protected under international law.

She insisted especially on the "obligation to minimise any use of force in the policing of protests only to that absolutely necessary as measure of last resort".

Throssell also voiced concern at reports that internet services were disrupted in the country and called on authorities to ensure access was restored.

South African journalists claim they were held, 'tortured' in eSwatini

Two South African journalists were detained and "tortured" by security forces while on assignment in Eswatini, their publication said Monday.

Cebelihle Mbuyisa, 28, and Magnificent Mndebele, 24, were detained on Sunday by soldiers along a highway near the central town of Matsapha while returning from covering the funeral of a man who was allegedly shot by security forces during the protests, their non-profit publication New Frame stated.

They "were detained, assaulted and tortured by security forces," said their employer, adding that "plastic bags were placed over their heads to suffocate them".

The pair "were threatened at gunpoint, their cameras were seized" and they were forced to delete footage and photographs from the funeral, including interviews with people who were shot and injured.

After legal intervention, they were released and returned home on Monday.

South African truck drivers drove back in the country last Friday after spending a worrying night in Eswatini, amid fears their vehicles might be attacked.

Trucks wait on the South African side of the Oshoek border post as truckers fear to enter the country.

Demonstrations escalated radically last week when protesters defied a dusk-to-dawn curfew to take to the streets, looting and torching buildings linked to King Mswati IIIand, as they demanded political reform.

The military was deployed to quell the protests.

Shops were closed during the violence but some were slowly reopening Monday, according to an AFP correspondent in the capital Mbabane.

A dusk-to-dawn curfew remains in place, with a heavy police presence on the streets.

Acting Prime Minister Themba Masuku on Monday said "the situation on the ground has stabilised, as our security forces have ensured the maintenance of peace and order across all regions".

Meanwhile a panel of envoys from the regional bloc SADC visited the kingdom on Sunday on a fact-finding mission.

"This was an initial mission and an urgent one," SADC told AFP, adding that they held talks with government officials as well as religious and civil society groups.