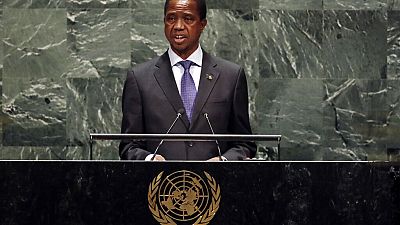 Zambia is on "the brink of a human rights crisis," Amnesty International said on Monday, alleging that President Edgar Lungu is using repressive tactics to win another term in elections set for August 12.

Zambia has established a good track record of holding scheduled elections since the re-introduction of multi-party democracy in 1991 by founding president, the late Kenneth Kaunda, who had presided over a one-party system for over two decades.

Kaunda accepted defeat after 27 years in power and retired. When Kaunda died aged 97 earlier this month, he was widely hailed as a statesman and a revered fatherly figure.

Zambia, a country of 18 million people, won a reputation as a stable democracy in a continent where elections often lead to conflict.

Now, Amnesty International is accusing Lungu of trying to reverse those gains.

“The human rights situation has drastically deteriorated,” said Amnesty of the rule of Lungu, 64, who first took power in 2015 after winning a disputed snap election to finish the term of populist leader Michael Sata who died in office. Lungu was then elected to a full five-year term in 2016, although his main rival again alleged fraud.

This will be Lungu's last term in office if he wins, and Amnesty International is alleging that he is using repression to ensure victory.

“What we have seen in Zambia, especially in the past five years, is an increasingly brutal crackdown on human rights, characterized by brazen attacks on any form of dissent,” said Deprose Muchena, Amnesty International’s Director for East and Southern Africa.

In a report titled “Ruling by fear and repression,” the human rights organization says Zambia has seen a number of police killings, arrests of opposition leaders and the shutting down of media outlets amid “a climate of fear and impunity.”

Social media activists are not safe, said Amnesty International, citing the case of a 15-year-old who is awaiting trial on three counts of criminal libel after criticizing Lungu on Faceboook.

Lungu has previously denied stifling the opposition and pledged free and fair elections during a meeting with foreign diplomats earlier this year.

The Zambian president faces more than a dozen other contenders but his main rival remains Hakainde Hichilema who he narrowly defeated in 2015 and 2016.

Lungu has assured the nation of his health after collapsing earlier this month.

Zambia, Africa’s second biggest copper producer, is battling an economic crisis worsened by the outbreak of COVID – 19 which has resurged in recent weeks.