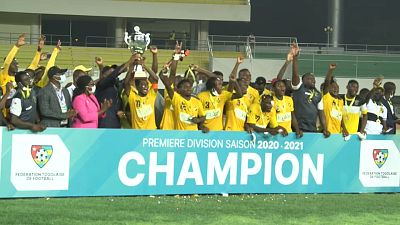 ASKO de Kara are the new champions of Togo's championship. On Sunday ASKO De Kara beat its rival from the same city, the Association Sportive de la Kozah (ASCK). It took penalties to decide the encounter after a one one draw.

ASCK had opened the scoring in the 35th minute through Tchatakora Sémiou before a late equalizer from ASKO de Kara in the 85th minute took the match to extra time and then penalties.

"I feel very happy because the match is never won in advance".Tchakei Marouf, captain of ASKO de Kara said. "The championship was like a marathon, so it was not easy" an elated Marouf added.

Indeed, the championship ran like a marathon with two matches played per week. Due to the Coronavirus pandemic, the championship had to be organized in three months instead of nine because of the health crisis.

The respect of covid barrier measures in the stadiums was one of the main conditions imposed by the health authorities to allow for the staging of the championship.

"We have done a lot of COVID tests. We had about twenty positive cases for the whole championship. As of today, we have no more positive cases. It was well managed. The teams behaved very well in terms of COVID prevention" Dr Kouvahey Damien, head of the Medical Commission of the Togolese Football Federation

All matches were played behind closed doors except for the final. 2000 spectators were allowed in the stadium to the satisfaction of all.

Togo's Minister of Sports Bessi Kama Lidi commended the organization of the championship. "We saw the players who were vaccinated, who observed the barrier measures from the beginning to the end of this championship. And I say bravo to them" Lidi said.

With the success of the championship, Togo now looks forward to another challenge: the organization of African club competitions since the two finalists of the championship will represent the country in the African Champions League and the Confederation Cup.