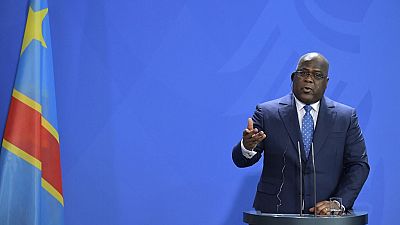 President Felix Tshisekedi on Thursday defended the state of siege and encouraged residents of Beni to "collaborate" with security forces to defeat an armed group that has killed hundreds of civilians in the eastern Democratic Republic of Congo (DRC) territory.

President Tshisekedi has been visiting the province of North Kivu since Saturday, which he has placed, like neighboring Ituri, under siege to give the army the means to fight against rebel groups by replacing civilian authorities.

"I ask you to collaborate with the army and the police here in Beni. Do not doubt them, do not distrust them," he added during an exchange with representatives of the population.

Bordering Uganda, the territory of Beni in North Kivu province is under threat from the Allied Democratic Forces (ADF).

This armed group of Ugandan origin is accused of having massacred nearly 1,200 civilians since November 2019 alone.

"This is not a classic war, the enemy is devious," commented the president about the ADF who live retreated in the jungle and forest, launching night attacks against villagers and impoverished farmers. "We will use whatever means necessary to eradicate this cancer," he said. "Our armed forces will ramp up more and more in the coming days," he promised, as military operations are supposed to take place since November 2019 against the ADF.

In addition to the ADF, some 120 armed groups of various sizes have been listed in eastern DRC, according to the Kivu Security Barometer (KST).

Félix Tshisekedi has reiterated his desire to demobilize Congolese militiamen who have joined these armed groups, often because they have no other source of income. "We have an amount of 50 million dollars from the World Bank to put this policy in place," said the head of state.