The Association of Licensed Telecoms Operators of Nigeria confirmed Saturday that its members had complied with the federal government's directive to suspend access -- indefinitely, to the social media network Twitter.

After Friday’s official suspension announcement by the minister of information and culture, operators received formal instructions from the Nigerian Communications Commission -- to which they complied upon a robust assessment of the request.

Daniel Seun Olatunde, a Nigerian Twitter user, confirms that his access to the platform has been blocked.

"This morning, I couldn’t even tweet, you see it's... it’s shameful, it’s shameful that in every strata, in every area of life they want to take everything from the citizens."

The suspension came two days after the platform deleted a tweet -- deemed in violation of its terms of use, by President Muhammadu Buhari.

"The Federal Government has suspended, indefinitely, the operations of the microblogging and social networking service, Twitter, in Nigeria," ministry of information and culture spokesman Segun Adeyemi said in a statement Friday.

The statement said that "the persistent use of the platform for activities that are capable of undermining Nigeria's corporate existence" had triggered the suspension.

Rotimi Olawale, a Nigerian Twitter User and the Executive Director of Youth Hub Africa, reflects on the presence of the platform in the county.

"If you recall a couple of weeks back, there was a huge debate on social media when Twitter decided to start its Africa operations in Ghana, and Nigerians were like, 'Hey! We deserve it.' Now Nigerians will say 'You know what, if Twitter had actually had an office in Nigeria maybe they would have been met with security forces this morning to arrest them or to stifle their operations.'"

Frank Tietie, a human rights lawyer, is looking at the current state of affairs critically.

The controversial tweet recalled -- in a perceived veiled threat to the Indigenous people of Biafra, Nigeria's 1967 civil war which saw the massacre and starvation of around three million Igbos

"Those of us in the fields for 30 months, who went through the war, will treat them in the language they understand," the president had posted on Twitter.

The 78-year-old president, a former general, referred to "those misbehaving" in recent violence in the southeast, where officials accuse separatists of attacks on police and election offices.

Twitter on Wednesday then deleted the remark on the president's account after he made this reference to the country's civil war four decades ago in a warning about recent unrest.

The minister of information and culture Lai Mohammed accused Twitter of double standards by ignoring believed-violent messages from a leader of the Indigenous People of Biafra separatist movement.

"The mission of Twitter in Nigeria is very, very suspect," Mohammed told reporters after the US company deleted the president's tweet.

In response to the network's suspension, Twitter said that the move was "deeply concerning."

"We're investigating and will provide updates when we know more," the company said in a statement.

Nigeria announced in 2019 that it would tighten regulations on social media to fight fake news and disinformation, but the bill has been put on hold amid concerns over freedom of expression.

International human rights groups and diplomats have condemned the move, which followed previous attempts by the government of Africa's most populous country to regulate social media.

Amnesty International on Friday condemned the move, calling on Nigeria to "immediately reverse the unlawful suspension".

Reacting to the suspension of Twitter in the country, the United Kingdom's deputy high commissioner in Nigeria Gill Atkinson said "any action taken by government must be measured, proportionate and not suppress basic freedoms."

"VPN app" was the second most searched trend Saturday on Google in Nigeria, as virtual private networks can enable Twitter users to bypass the ban.

Twitter is popular in Nigeria where the median age is 18, and has played a role in public discourse with hashtags #BringBackOurGirls, after Boko Haram kidnapped 276 schoolgirls, and #EndSARS, during anti-police brutality protests last year.

And even now #KeepItOn in response to the current Twitter suspension.

Another group representing local telecoms, the Association of Telecommunications Companies of Nigeria (ATCON) said it was working with the authorities "to ensure a speedy resolution of the suspension."

"While the Association and its member companies understand the position of the federal government, the reasons for the directive, and have complied with the directive, it is pertinent that the issue is resolved soon in the interest of all," ATCON president Ikechukwu Nnamani said. 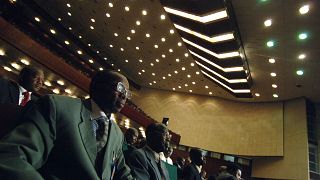 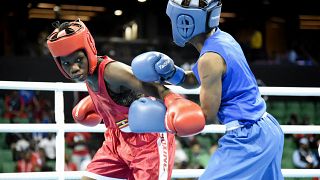 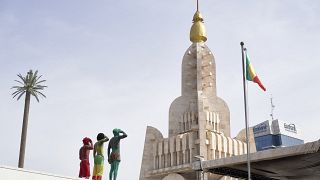