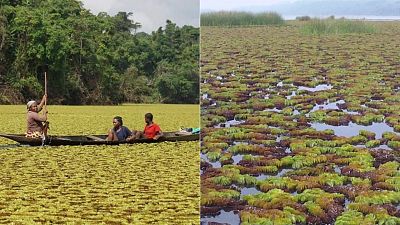 Cameroon’s coastal waters have been invaded by three of the world’s most dangerous water weeds, proving an existential threat to aquatic ecosystems and livelihoods of riparian communities.

The latest of these weeds, Salvinia molesta, is a free-floating, green-brown freshwater fern with branching horizontal stems. It has already invaded more than 40 per cent of Lake Ossa (4,000 hectares), the largest natural lake found on Cameroon’s coast, since 2016.

The weed doubles in size every 10 days.

The other two, water lettuce and water hyacinth, appeared much earlier - in 1949 and 1970 respectively, according to the Cameroon National Herbarium, a collection centre for plant specimens.

As a flowering invasive aquatic plant, water hyacinth now covers 85 per cent of River Fiko and half of the Wouri River Basin - all water bodies found in Cameroon’s Littoral Region. Mats of this invasive weed double in size in five days.

The perennial evergreen floating plant known as water lettuce is found in patches on the surfaces of the Wouri River Basin and the lower reaches of the Sanaga River.

“Water lettuce doubles its biomass in just over five days; triples it in 10 days, quadruples in 20 days and has its original biomass multiplied by a factor of 9 in less than one month,” says Dr. Kenfack Voukeng Sonia Nadège, a Cameroonian weed scientist working with Green Connection, a local environmental conservation non-governmental organisation.

“As floating weeds, they form dense mats on the surface of water bodies, disrupting aquatic flora and fauna underneath and thus adversely affecting the water ecosystem,” Dr. Kenfack adds.

All these invasive species are native to southeastern Brazil and northern Argentina but can be dispersed within an aquatic system by wind in the dissemination of spores; water currents, floods, and animals; as well as through human activities such as transportation by boat or canoe.

Pollution due to human activities favours the development of these plants.

“Being the economic capital, the Littoral Region and especially Douala is the most industrialised municipality in Cameroon with about 60 per cent of the country’s industries’ discharges often released in the open spaces,” says Kenfack.

“Besides, houses built without proper flushing systems contribute to the increase of the nutrients in the environment. Pollution due to human activities favours the development of these plants,” she says.

Dr. Kamla Takoukam Kamla, founder of the African Marine Mammal Conservation Organisation (AMMCO), agrees that poor land use triggers the proliferation of invasive aquatic weeds in Cameroon’s coastal regions given that the water columns are enriched with nutrients.

“Two main nutrients needed for invasive weeds to grow are nitrogen and phosphorous coming from upstream. Lake Ossa and the Sanaga River (the largest River in Cameroon) are connected by a 3km channel. Once this river gets polluted, the lake also gets polluted,” explains Kamla.

“It is possible that the nutrients are coming from the industries, plantations and hydroelectric dam reservoirs that are constructed upstream.”

A threat to the livelihood of humans and protected species

The Lake Ossa complex which contains three main lakes and over twenty islands is located in Dizangue, Littoral Region of Cameroon. In 1974, the complex was designated a faunal reserve and since 2018, has been serving as a National Park.

Before the Salvinia invasion, fishing was the major source of livelihood for over 80 per cent of the local population according to Global Water Partnership.

The lake was also an important habitat for many wildlife species including manatees, freshwater turtles, crocodiles, monitor lizards, snakes, aquatic birds and over 18 families of fish.

Before the Salvinia invasion, fishing was the major source of livelihood for over 80 per cent of the local population.

These invasive species “can rapidly out-compete native species and dominate the ecosystem, consequently reducing biodiversity by their exponential proliferation, depriving in return the native species of space, nutrients and moisture,” she adds.

This results in a modification of the entire structure and functioning of the ecosystems.

The International Union for the Conservation of Nature (IUCN) has described the threat posed by Salvinia molesta to Lake Ossa and its ecosystem as "a conservation emergency." At least 400 fishermen used to fish in Lake Ossa - fish being the main protein source for a couple of thousand people who live around the lake.

“In the past, I was able to make between 15 and 21 Euros daily as profit from selling fish. But today, I can barely make 6 Euros a day as profit,” says Dina Marie-Louise, a 51-year-old who has been selling fish caught in the lake for the past 22 years.

The lake was also an important habitat for wildlife species including manatees, freshwater turtles, crocodiles, monitor lizards, snakes, aquatic birds and over 18 families of fish.

The mother of 12 said the Salvinia attack on Lake Ossa - their main source of livelihood for generations - has shattered her plans of building a house for her family. Seven of her children have dropped out of school for want of means.

Kouoh Elinga Charles, 56, who has spent 30 years fishing in the lake, expressed the same concern adding that he has resorted to odd jobs to feed his polygamous home.

“The salvinia plant has disrupted fishing considerably,” he says.

“Initially I was able to save 15.32 euros from fishing daily. But today, it is difficult to fetch 1.53 euros from the activity which can hardly satisfy our household needs,” the father of eight said.

Water hyacinth and Salvinia invasions have also disrupted fishing and sand extraction in the Wouri River Basin and in the River Fiko - other main sources of income to the riparian communities.

Lake Ossa used to harbour a minimum of 50 individual African manatees, the least-studied of the three manatee species in genus Trichechidae. But their number is on the decline owing to the Salvinia attack on the lake. Manatees are large, slow-moving mammals that frequent coastal waters and rivers. They never leave the water but, like all marine mammals, manatees must surface about every five minutes to breathe.

When carpets of invasive weeds lock the surface of the lake, they prevent the African manatee from surfacing and breathing.

“When carpets of invasive weeds lock the surface of the lake, they prevent the African manatee from surfacing and breathing. Consequently, they will likely leave Lake Ossa or move to another part of the lake not yet invaded by aquatic weeds,” Kamla said.

“If nothing is done, the lake will be completely invaded and there will be no fish, no manatees and no freshwater turtles which the lake is endowed with.”

Invasive species are considered the third most dangerous factor threatening world biodiversity, after habitat loss and over-exploitation, according to the International Union for the Conservation of Nature.

Can insects solve the problem?

The Integrated Weed Management (IWM) method entails combining multiple weed control systems into a single weed management programme, to contain the spread of a particular water weed according to Kenfack.

“Up to now, biological control offers a better opportunity to control the spread of these weeds, as compared to the other methods of control such as the chemical that could be dangerous to human and environment and the manual removal which is a very tedious process.

“Biological control uses host specific insects [Salvinia weevil in case of Salvinia molesta attack] which can only complete their life cycles on the target species to reduce the target plant populations. The insects are the plant’s natural enemies,” Kenfack said.

Salvinia weevils are small beetles which can eat the invasive weeds.

The first releases of the Salvinia weevil as a biological agent were at Lake Moondarra, Mount Isa, Australia in 1980.

“Adults and larvae both feed on these floating ferns,” says Matthew Purcell, Director, USDA ARS Australian Biological Control Laboratory - a structure jointly operated by the Agriculture Research Service of the U.S. Department of Agriculture and the Commonwealth Scientific and Industrial Research Organisation (CSIRO).

“The effectiveness varies from site to site depending on environmental parameters, temperature, nutrient availability and water flow, shade, etc.

“The larvae initially feed on roots, then move to the buds, finally tunneling into the Rhizome which can kill the plant; adults feed on all plant parts externally,” adds Purcell.

Scientists say biological control is globally considered as one of the most cost-effective, environmentally friendly and sustainable ways of reducing the impacts of invasive species.

Nearly 6,000 individual Salvinia weevils are being mass-reared in a facility in Lake Ossa by AMMCO.

“They were brought in from the Louisiana State University in the United States with the authorization of the Cameroon government,” says Kamla.

Scientists say biological control is globally considered as one of the most cost-effective, environmentally friendly and sustainable ways of reducing the impacts of invasive species.

“We keep mass-rearing them until we receive authorisation from the government to release them into the areas affected by water weeds. We are now conducting an experiment to know how long it will take for the weevils to get rid of these aquatic weeds in lake Ossa.”

An effective biological control of Salvinia molesta by using the Salvinia weevil was also applied in the Senegal River in the early 2000s. Similarly, the release of the weevil into South Africa’s fresh water systems in 1985 successfully brought Salvinia molesta under control.

“For water hyacinth, biological control entails the deployment of the weevils Neochetina eichhorniae and N. bruchi which are among the first to be used worldwide in more than 32 countries to control the weed,’’ explains Kenfack.

“They were found in some sites in the Wouri Basin causing damage on the mats of water hyacinth. However, their population is still small and must be mass-reared to obtain effective control of this plant (no need of an import permit).” The biological control agent of water lettuce is different though, she stresses.

Scientists have expressed hope that Cameroon may just be the next country for the successful implementation of biological control to weed out invasive water weeds.

“Because Cameroon is tropical, the prospects for successful biological control are high. I would predict that there will be a significant reduction in cover within 18 months, if not less,” says Julie Coetzee, Deputy Director and Manager of the Aquatic Weed Biocontrol Programme at Rhodes University, South Africa.

“While the process is not perceived as quick, in comparison to herbicide, it is sustainable in the long term. Patience is key,” she adds.

But Dr. Kenfack is concerned Cameroon may be racing against time.

"Limited progress [to mass-rear and authorise release of weevils] means the watercourses (Lake Ossa, Wouri Basin and Fiko just to name those) and all their biodiversity will be negatively affected.

“This calls for an urgent action in order to reap the benefits from these watercourses not only for us, but for the future generation,” she concludes. 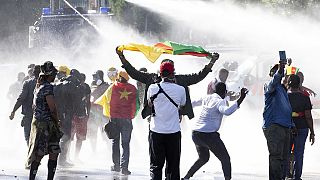