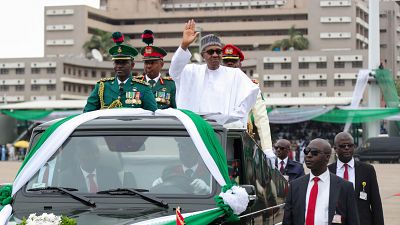 The Nigerian army on Monday expressed its support for President Muhammadu Buhari, who has been criticized from all sides for his inability to curb insecurity in the country, categorically dismissing any likelihood of a coup.

Nigeria, Africa's most populous country, is plagued by multiple conflicts, from a jihadist insurgency in the northeast, to attacks by criminal gangs carrying out mass kidnappings in the northwest and separatists targeting security forces in the southeast.

In a statement issued late Monday night, the Nigerian armed forces said they would continue to support the government despite the poor security situation and sustained criticism of Buhari, a 78-year-old former general.

"We categorically declare that the Armed Forces of Nigeria remain totally committed to the current administration as well as all the democratic institutions associated with it," army spokesman Onyema Nwachukwu was quoted as saying in a statement.

"We will continue to remain apolitical, subordinate to the civilian authority, firmly loyal to the president, commander-in-chief of the armed forces of the Federal Republic of Nigeria, President Muhammadu Buhari and the 1999 Constitution as amended," the military spokesman added.

Last week, parliament asked the head of state to declare a state of emergency.

At the same time, a flurry of statements from parliamentarians, local governors and even Nobel laureate Wole Soyinka called on President Buhari to contain the violence.

"Our nation is at war. Those who have proven themselves weak and incapable must learn to swallow their pride and seek help," Soyinka urged.

A top Catholic cleric has also criticized the President's security record, urging him to resign or face impeachment. He was immediately attacked by the presidency.

President Buhari met with his top security chiefs last week and again on Tuesday to discuss the violence rocking the country.

In addition, the army hoped that the "current security challenges are not insurmountable".

Buhari, a former coup general in the 1980s, was elected in 2015 on a promise to crush the jihadist rebellion in the northeast, which has killed 36,000 people and displaced two million.

But six years later, the Boko Haram and Islamic State in West Africa (Iswap) groups still control vast rural areas as well as strategic roads, where they are increasing attacks and kidnappings of soldiers, civilians and NGO workers.