Nigeria will restrict access to its territory to all foreign travellers who have stayed in Brazil, India and Turkey over the past two weeks, in order to limit the spread of the coronavirus, health authorities announced Sunday.

The travel restriction will take effect from May 4.

Sunday's statement -- issued by Boss Mustapha, chairman of the pandemic presidential steering committee, comes in light of the urgent spike in COVID-19 cases and the believed even more contagious virus variants in the concerned countries.

This measure does not apply to passengers having made a transit stop by one of these countries.

The anti-COVID 19 committee said it made the decision based on a "risk assessment taking into account epidemiology, the prevalence of variants of concern and average passenger volume between Nigeria and each country, among other indicators".

Nigerian citizens and permanent residents in Nigeria who have travelled to at least one of the three countries in the last 14 days will be required to undergo a mandatory one-week quarantine at a government-approved facility upon arrival, the statement said.

In addition, any passenger arriving in Nigeria will now have to present a negative test for COVID-19 less than 72 hours old, instead of 96 hours old.

Africa's most populous country has officially reported more than 165,000 cases of the coronavirus, with 1,954 deaths. But these figures are considered to be underestimates, due to the low number of tests carried out in relation to its more than 200 million inhabitants.

India has reported over 300,000 daily cases for more than ten straight days.

The Asian nation's hospitals, morgues and crematoriums have been overwhelmed as many families seek out medicines and oxygen on their due to scarcity and dwindling national supplies.

Turkey -- currently with the world's fourth-highest number of cases and the worst on a per-capita basis among major nations, imposed a nationwide “full lockdown” on Thursday. This will last until May 17 in an effort to curb a surge in coronavirus infections and deaths.

Brazil has seen a drop in new coronavirus since its late-March peak, but infections still remain high by historical standards. Total deaths in the country are second only to the United States. 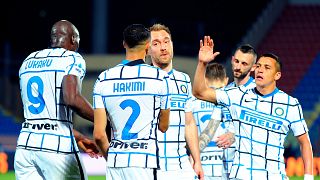