The beyond warm welcome he has received while home is a testament to the ever-growing popularity on the African continent over the last months of its renowned elite fighters.

Ngannou shares his experience of thriving as an internationally successful African athlete.

"There is a lot of solidarity between us Africans because we are overseas ( not at home) and we are trying to conquer a crown that was not meant for us. So we also use this as a model of hope, of courage.

"We don't just do it for ourselves. There is a whole population, a whole country, a whole continent that is looking at us today and that also wants to achieve such a thing, that dreams through us.

How can African youth hope to follow in the athletic footsteps of their prestigious elders?

The ferocious -- yet lovable, giant, gave some insightful advice.

Passing the baton is one of the objectives of the champion whose triumphant return to Batié is a full-circle moment that reminds him of his humble beginnings doing difficult manual labour before migrating to Europe.

A time when all he could do was dream and give his all towards his belief in himself -- to eventually show the entire world what he is made of and where he proudly comes from, as an international MMA champion. 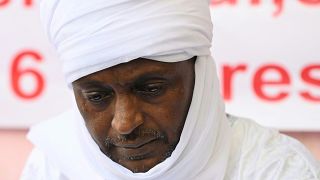