The two directors of the acclaimed natural history documentary "My Octopus Teacher" were astonished when their film was nominated for an Oscar.

"It is extraordinary. It's hard to describe," co-director Pippa Ehrlich told The Associated Press in a recent interview from her home in Cape Town, South Africa. "It was really not something that we expected so when they read out 'My Octopus Teacher' during the announcement, I think I literally jumped two metres high. Yeah, it was an incredible, incredible moment. It's only sinking in now."

The documentary focuses on Craig Foster, a South African filmmaker who was burned out and depressed after spending years filming some of the most dangerous animals on the planet.

He decided to put his career on hold to reconnect with his roots - the magical underwater world of the kelp forest off the coast of his hometown, Cape Town. For nearly a decade, Craig went diving daily in the icy cold waters, ditching wetsuit and scuba rig in one of the most predator-dense places on earth. The common octopus he met and tracked became first his subject, then his teacher, showing him things no human had ever witnessed.

Conservation and science journalist Ehrlich was interested in the kelp forest as an eco-system. She met Foster on a dive arranged by a mutual friend and the pair started diving together regularly. Foster decided to make a film about the octopus, sent Ehrlich a treatment, and she immediately wanted to become involved.

Reed was a later addition to the team, working on how the story was going to be told. He conducted three days of interviews with Foster to hear the whole story and created a narrative from there.

The result is the multi-award-winning "My Octopus Teacher," which was shot over eight years, producing 3,000 hours of footage.

The two directors opted to tell a personal story rather than create a natural history documentary.

"We felt we offered something different and the unique thing about the story that we had was the sort of purity of this very sort of personal and unusual relationship between a human being and an octopus," said Reed.

Reed has been working in natural history filmmaking for 20 years and said he had never seen footage of the kind shot by Foster.

"It was amazing. At first look, it was just incredible what had been caught on camera and it had a sort of authenticity and an immersive feel to it that I felt I hadn't really seen in natural history before," said Reed.

"There was something about how Craig had sort of captured this relationship. And it has a lot to do with... how he dives, you know, he strips out every barrier he possibly can between him and the environment. He's diving, you know, for hours on an end and he's using a relatively small camera and he's there an he's sort of accessing this sort of the details of this world and particularly this creature in a way that, yeah, I just don't think had been done before in the water," he added.

The film launched on Netflix in September and has celebrity fans including Jane Goodall, Amy Schumer and Justin Theroux. The film also has a score of 100% on the review aggregator site Rotten Tomatoes. 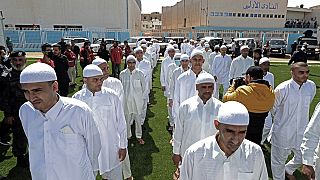