Tanzanian police say at least 45 people died in a stampede that took place on March 21 when citizens paid their last respects to the country’s late President John Pombe Magufuli.

Dar es Salaam regional police commander Lazaro Mambosasa said on Tuesday that there had been a lot of people who wanted to get in the stadium, and some were not patient.

"They tried to force their way in and that resulted in a stampede. Forty-five died in the accident,” Dar es Salaam regional police commander" Lazaro Mambosasa told AFP.

Five of the deceased were from the same family.

A woman and four children were earlier reported crushed in the accident at Uhuru Stadium, though the true toll of the stampede was not announced at the time.

The stampede that took place on March 21 also injured 37 people. According to Mambosasa, the 37 mourners who were injured in the March 21 stampede have all been discharged from hospital after treatment.

Tens of thousands of mourners lined the streets of Dar es Salaam this month to bid farewell to Magufuli, whose sudden death from a short mysterious illness was announced by the government

The stampede happened on the second day of tributes at Uhuru Stadium.

Tanzania's late President Magufuli, who died on March 17 at the age of 61, was laid to rest in his hometown Chato on March 26. 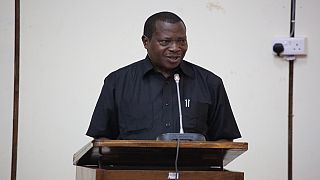