A transitional government in Libya has taken power officially beginning a tenure designed to end with democratic elections late this year.

The ceremony in Tripoli came a day after Dbeibah and his Cabinet were sworn in before lawmakers and Libya's top judges in the eastern town of Tobruk.

That roadmap, agreed to by a U.N.-picked Libyan political forum last year, set Dec. 24 for general elections in the oil-rich country.

The unexpectedly smooth transfer of power is seen as an important step to end the chaos in the North African country.

The lack of a proper handover among legislators in 2014 was a major factor in the split of Libya's institutions.

The presence of thousands of foreign forces and mercenaries is another major challenge.

The U.N. Security Council last week called for countries with troops and mercenaries in Libya to withdraw them "without delay."

The U.N. has estimated that there are 20,000 foreign fighters in Libya, including Syrians, Turkish, Sudanese and Russians brought to the country by the rival sides.

Libya was plunged into chaos when a NATO-backed uprising in 2011 toppled longtime ruler Moammar Gadhafi, who was later killed.

The country was in recent years split between rival east- and west-based administrations, each backed by armed groups and foreign governments. 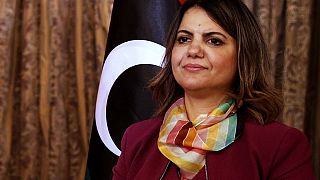