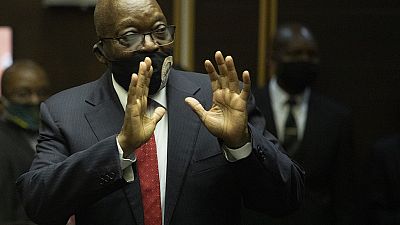 The commission probing widespread state corruption when Jacob Zuma was president of South Africa, on Monday requested the Supreme Court to hand down a two year jail time for Zuma over his refusal to testify.

Since the creation of the commission in 2018, Zuma, already implicated by some forty testimonies, has on several occasions tried to avoid having to explain himself, thus, piling up appeals or asserting his right to silence.

After months of avoiding to testify, Judge Raymond Zondo's commission put his threats into action by filing an urgent appeal with the Constitutional Court to punish the former head of state, for "intentionally and illegally" refusing to advance the investigation.

On Monday, February 15, the former South African president again snubbed the anti-corruption commission before which he was summoned all week.

However, this time, he had at the same time ignored a January ruling by the Constitutional Court, forcing him to appear and denying him the right to remain silent.

The commission is now asking the Supreme Court to decide whether Zuma's latest affront constitutes "contempt of justice" and, if so, whether he should be sent to prison.

Last week, the former head of state accused some judges of being "without faith or law". He said he was certain that Judge Zondo's desire to have him convicted of contempt of court would be fulfilled, accusing the president of "political propaganda".

The arm wrestling between the two men has been going on for months, with both of them using the legal arsenal to launch their attacks.

President, Cyril Ramaphosa, who has made the fight against corruption a battle horse, on Monday warned of the possible consequences of the remarks made by his predecessor.

Jacob Zuma, 78, testified only once before the commission in July 2019. He said he was being treated as an "accused" and not a ‘’witness’’.

Dozens of ministers or former ministers, elected officials, businessmen or high-ranking civil servants have already been heard, unpacking the scandal’s in the Zuma era. Zuma, who ruled the Southern African nation between 2009 and 2018, was forced to resign in 2018 following a slew of scandals in his administration.