DR Congo on Sunday announced a "resurgence" of Ebola in its troubled east after a woman died of the disease, just three months after authorities declared the end of the country's latest outbreak.

The World Health Organization (WHO) said it had dispatched a team of epidemiologists to the scene of the latest death to investigate.

The victim was married to an Ebola survivor.

North Kivu provincial minister of health Eugene Nzanzu Syalita said they were investigating if the latest case is linked to a previous outbreak.

"It could happen because we know that she is the wife of an Ebola survivor, so it could happen. So, we are here, people should stay calm and measures should be respected", said Syalita.

Butembo and Beni in eastern Democratic Republic of Congo were the epicenters of a previous outbreak that run from August 1, 2018 to June 25, 2020, that killed more than 2,200 people.

Ebola haemorrhagic fever was first identified in 1976 after scientists probed a string of unexplained deaths in what is now northern DRC.

The average fatality rate from Ebola is around 50 percent but this can rise to 90 percent for some epidemics, according to the WHO.

The virus that causes the disease is believed to reside in bats. 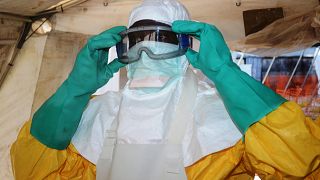