An alliance of Somali opposition leaders has announced they no longer recognise President Mohamed Farmajo as the head of state, as his mandate officially ended on February 8th.

Previous talks between representatives of the federal states and the central government in Dusamareb had failed to produce a political agreement.

"We no longer recognize Farmajo as President. His term has ended and he is not only an obstacle to the nation but to national elections as well. He couldn't reach a deal with the regional leaders because he left the meeting on the elections, he can no longer be in charge as his tenure is over", said Abdirahman Abdishakur Warsame, a Somali presidential candidate.

Farmajo and the leaders of Somalia's five semi-autonomous federal states reached an agreement in September that paved the way for indirect parliamentary and presidential elections in late 2020 and early 2021.

But it fell apart as squabbles erupted over how to conduct the vote, and last-minute talks to salvage the agreement collapsed Friday.

Jubaland, one of the regions at odds with Mogadishu, accused Farmajo of refusing their attempts at compromise.

The president blamed his rivals for reneging on the terms.

With no deal in sight, opposition leaders fear President Mohamed Farmajo might request a term extension. A move lawmakers said they would reject.

The "Villa", as Somalian call the Presidency, has dismissed rumours saying the government planed to request on term extension from parliament.

The opposition alliance suggested the creation of a council of lawmakers that could elect a transitional leader to govern until elections can take place.

Somalia's foreign backers urged Somalia's divided political leadership "to resume their dialogue urgently" so that elections can take place as soon as possible.

"We believe that it remains possible to reach consensus, and that all sides are open to further discussions," the United Nations, African Union and other international partners said in a statement Monday.

Any attempt at partial or parallel elections would not be supported by the international community, the statement continued.

Many fear that the political tensions rising from this deadlock might further reinforce the Al Shabaab insurrection that has intensified its attacks in the last year. 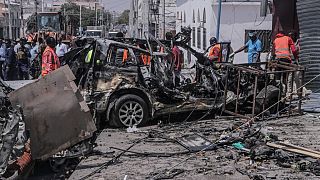