After UN-sponsored talks produced a new interim government in Libya on Friday that would hold elections in December, many have hailed the move as a massive step towards peace between the warring sides.

Delegates from the North African country's factions on Friday selected four leaders to guide it through to national elections in December in a major - if uncertain - step toward unification.

On the streets of Benghazi, residents have mixed feelings on if peace can be achieved.

"God willing, I hope that all the problems of unifying institutions will be solved, and also that there will be a state in Libya, until December 24, which is the date for the parliamentary elections and also the presidential elections for Libya," said Raouf Al-Jilani, a local resident.

But others were more skeptical.

"This step will be a historic milestone for the country because it is very likely that regional powers and the large local forces, represented by the National Army (the east-based Libyan Arab Armed Forces), will reject such outcomes," said local resident Osama Al-Warfare.

"I see war on the horizon. I think Libya will enter a third vortex with a stronger and fiercer civil war."

For 10 years Libya has been engulfed in chaos since a NATO-backed intervention ended Muammar Gaddafi’s four-decade rule.

Since 2014 Libya has been split between warring administrations backed by foreign powers.

And in April 2019, Khalifa Hifter, a military commander allied with the eastern government, launched an offensive to seize the capital, Tripoli.

His campaign failed after 14 months of fighting and last October, the UN convinced both parties to sign a cease-fire agreement and embark on a political dialogue.

Abdisalam al-Badri, the east-based government's deputy prime minister, said he hoped the new interim government would return Libya to being "a sovereign and independent state where no one interferes in its internal or external affairs."

But he said the shadows of war still linger and unification will be difficult.

"We should not forget that there is a part of Libyan soil with foreign forces on it, and on it are occupiers from all corners of the earth, all the world's intelligence in addition to the mercenaries who came from all over the world, we have to get rid of them." 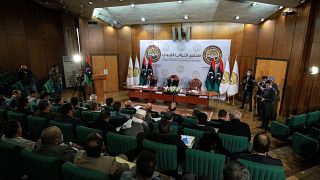