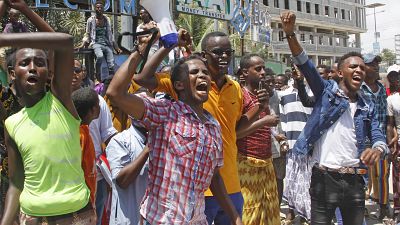 Dhagajuun was reportedly killed in early Thursday in a shootout near Hawlwadag intersection, around a security checkpoint in Mogadishu.

The demonstrators were protesting against the killing of the commissioner who is reported to have just returned from a medical trip.

Dhagajun was recently in Turkey receiving medical treatment for injuries sustained in a bomb blast, and was killed hours after returning to the Somali capital according to Somali journalist Harun Maruf.

The claim was also shared by Mogadishu mayor Omar Filish.

“The deceased was killed last night at around 2 am between Howlwadag intersection and Aden Adde Road junction, after he was shot by soldiers there, and two of his bodyguards were wounded in the incident,” a statement from the Mayor’s office read in part.

Omar Filish's statement expressed condolences over the killing and said that an investigation will be launched into the cause of the shooting between the government forces and the bodyguards of the deceased. Some of Dhagajuun's bodyguards are reported to be seriously injured from the shooting.

Somalia is weeks away from general elections. The government of President Muhammed Abdullahi Farmajo plans to hold elections on Febreuary 8 in the three states of Galmudug, Hirshabelle and Southwest. The elections come amid a lack of agreement on the composition of the Electoral Committee and without the participation of Jubbaland and Puntland.