Uganda's President Yoweri Museveni has been re-elected for a sixth term with 58.64% of the vote, the electoral commission said on Saturday, as rival opponent Bobi Wine alleged widespread fraud a day earlier and said citizens should reject the result.

Wine, whose real name is Robert Kyagulanyi, won 34.83% of the vote, according to the commission.

Museveni,76, has been in power for 35 years and campaigned for another term arguing his long experience makes him a good leader.

The pop-star turned politician Wine,38, appealed to young Ugandans and pledged to end what he calls dictatorship and widespread corruption.

Wine on Friday claimed victory in the presidential elections, rejecting as a "complete sham" early results that gave Museveni a wide lead.

He told journalists soldiers had beaten his security guard before taking up position around his house.

Voter turnout was at 57.22%, during which the authorities suspended access to the Internet and social networks, after a particularly violent campaign.

Wine said on Friday he had video proof of voting fraud and would share the videos when internet connections are restored.

Museveni is one of the world's longest-serving leaders and has been in the top job since seizing control in 1986 when he helped to end years of tyranny under Idi Amin and Milton Obote.

Ugandans have been repeatedly reminded of his image as a liberator and peace-bringer.

But the former rebel leader has crushed any opposition and tweaked the constitution to allow himself to run again.

The United States, a major aid donor to Uganda, cancelled a diplomatic observer mission after too many of its staff were denied permission to monitor the election.

Besides an African Union mission and East African Community there was no major international group watching over the vote.

The Electoral Commission denies Wine's disputes that there was vote-rigging.

But poll monitors have criticised the government closure of internet access and social media and messaging apps.

_"The mission was not able to observe transmission of results from the polling stations to the district and national tallying centers. _

"We were also not able to transmit our information in real time. About polling day, the mission is concerned that its electronic means of transmission of election day observation was hampered by the shutdown of the internet on election day."

Two days of protests in November led to 54 people being killed.

The streets of the capital Kampala are largely empty as residents fear an outbreak of violence.

The poll has been marred by arrests of the opposition, journalists being targetted and a deadly protest in November that saw more than 50 people killed.

"Before we went to the polls business was going on well, but now people are still afraid to resume normal operations as you see there are few security forces and people still fear to open their shops," said Robert Miiro, Kampala resident:

As the dust settles on Museveni's victory Ugandans fear the worst as the country has never witnessed a peaceful transfer of power since independence in 1962. 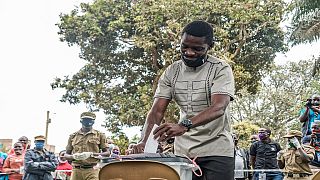 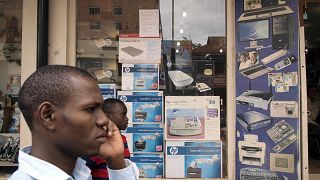